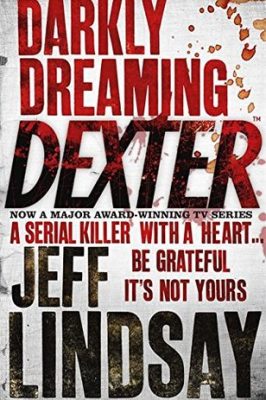 Synopsis:
Meet Dexter Morgan, a polite wolf in sheep’s clothing. He’s handsome and charming, but something in his past has made him abide by a different set of rules. He’s a serial killer whose one golden rule makes him immensely likeable: he only kills bad people. And his job as a blood splatter expert for the Miami police department puts him in the perfect position to identify his victims. But when a series of brutal murders bearing a striking similarity to his own style start turning up, Dexter is caught between being flattered and being frightened — of himself or some other fiend.

Review:
I absolutely loved the show Dexter, well aside from the finale but we won’t get into that. I had no idea that the show was based on books! When I was researching books based in my hometown (for my reading challenge) these books came up and I knew I wanted to read them. I figured if I loved the show I would love the books. Books are always better right? I have to say I liked the book but I prefer the show. Maybe it is just because I loved the show so much and I adored Michael C. Hall as Dexter. When I was reading the book I was trying to remember the sequence of the show and if one book was a whole season or just a couple episodes. It made me want to go back and re-watch it because I couldn’t figure it out. I already have the second book on hold at the library so I will definitely be reading the entire series. I have to say the show did a great job of staying very true to the books, at least so far.

Favorite Quotes:
“Weren’t we all crazy in our sleep? What was sleep, after all, but the process by which we dumped our insanity into a dark subconscious pit and came out on the other side ready to eat cereal instead of our neighbor’s children?”

“I’m not sure what I am. I just know there’s something dark in me. I hide it. I certainly don’t talk about it, but it’s there always, this Dark Passenger. And when he’s driving, I feel alive, half sick with the thrill of complete wrongness. I don’t fight him, I don’t want to. He’s all I’ve got. Nothing else could love me, not even… especially not me. Or is that just a lie the Dark Passenger tells me? Because lately there are these moments when I feel connected to something else… someone. It’s like the mask is slipping and things… people… who never mattered before are suddenly starting to matter. It scares the hell out of me.”

“Whatever made me the way I am left me hollow, empty inside, unable to feel. It doesn’t seem like a big deal. I’m quite sure most people fake an awful lot of everyday human contact. I just fake it all. I fake it very well, and the feelings are never there.”

“Anybody can be charming if they don’t mind faking it, saying all the stupid, obvious, nauseating things that a conscience keeps most people from saying. Happily, I don’t have a conscience. I say them.”