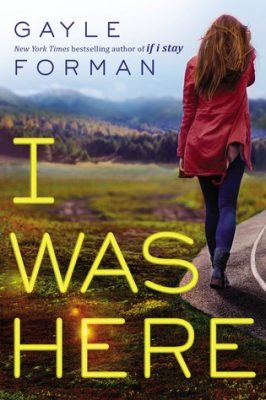 I Was Here by Gayle Forman
Published by Viking Press on January 27th 2015
Genre: Young Adult
Format: Hardcover
Pages: 270
Challenge Theme: A book set on a college or university campus

Synopsis:
Cody and Meg were inseparable.
Two peas in a pod.
Until . . . they weren’t anymore.

When her best friend Meg drinks a bottle of industrial-strength cleaner alone in a motel room, Cody is understandably shocked and devastated. She and Meg shared everything—so how was there no warning? But when Cody travels to Meg’s college town to pack up the belongings left behind, she discovers that there’s a lot that Meg never told her. About her old roommates, the sort of people Cody never would have met in her dead-end small town in Washington. About Ben McAllister, the boy with a guitar and a sneer, who broke Meg’s heart. And about an encrypted computer file that Cody can’t open—until she does, and suddenly everything Cody thought she knew about her best friend’s death gets thrown into question.

Review:
This book was just ok, not bad but not great. I enjoyed the aspect of Cody trying to come to terms with her best friend’s suicide by trying to figure out why she would do that. Unfortunately when it comes to suicide no one ever really knows. I found the fact that there are suicide encouragement groups online horrifying. Not that it surprises me in today’s world but it is horrifying nonetheless. I also enjoyed how the relationship between Cody and her mother developed over the course of the book. What I didn’t love was the romance aspect between Cody and Ben. I just didn’t find it necessary to the story at all. I didn’t mind the relationship being in the story but would have made more sense as a friendship, at least to me. I found it to be a forced romance in a book about something else entirely. Also I probably could have found a better book to fit the theme. While some of this book is set on a college campus the majority was not. Oh well, you live and you learn!

Favorite Quotes:
“You had a pile of rocks, and you cleaned them up pretty and made a necklace. Meg got jewels, and she hung herself with them.”

“It’s funny how once you start pretending, you realize how much everyone else is too.”

“She didn’t tell me that she found life to be so unbearably painful. I mean, I didn’t even have a clue.” A kind of laugh escapes, and I know that if I’m not very careful, what follows will be something I don’t want to hear, that no one wants to hear. How can you not know that about your best friend? Even if she doesn’t tell you, how can you not know? How can you believe someone to be beautiful and amazing and just about the most magical person you’ve ever known, when it turns out she was in such pain that she had to drink poison that robbed her cells of oxygen until her heart had no choice but to stop beating? So don’t ask me about Meg. Because I don’t know shit.”

“Life can be hard and beautiful and messy, but hopefully, it will be long. If it is, you will see that it’s unpredictable, and that the dark periods comes, but they abate — sometimes with a lot of support — and the tunnel widens, allowing the sun back in. If you’re in the dark, it might feel like you will always be there. Fumbling. Alone. But you won’t — and you’re not.”

“It seems abstract when you’re dealing with people online, but they are still people, and some of them are not nice people, not the kind you ever want to be in a room with.”
Sometimes you don’t even need to be in the same room for the damage to be done.”