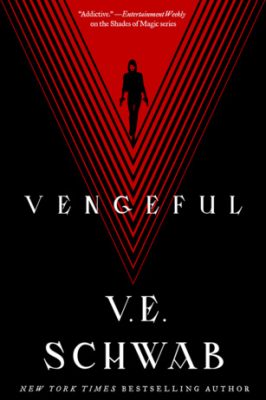 Synopsis:
Eli Ever and Victor Vale were only medical students when their mutual discovery that near-death experiences can, under the right conditions, manifest extraordinary abilities.

They were best friends, and rivals, and then enemies. They were dead, then alive, and then—Eli killed Victor, once and for all. Or so he thought—but Sydney Clarke felt otherwise, and used her own superpower to tip the scales. Now, a trio hides in the shadows, while another takes advantages of post-death life to take over the city of Merit.

If there can be life after death—will there be calm after vengeance, or will chaos rule?

Review:
I am so happy that the second book in this series didn’t disappoint. I am always worried about sequels to a book I loved because I am afraid I will be disappointed. That was definitely not the case with this follow up to Vicious! Schwab delves even deeper into the story of Eli & Victor while bringing new, powerful characters into the mix. I feel like this book did much more of the jumping back & forth between both characters and time. A lot of the time that would become utterly confusing but Schwab has a way of doing it where you don’t get lost. You know exactly where in time and with whom you are with. I loved reading more about how Eli came to be, I still do not like him but it helped me understand him much more. I loved how Sydney became a bigger player and also the introduction of Marcella & June. The story was great, the writing was great, the character development was great…the book was just great! It also left it open for a 3rd book in the series so fingers crossed!!!

Favorite Quotes:
“Perhaps she was glass. But glass is only brittle until it breaks. Then it’s sharp.”

“Maybe we are broken. But we put ourselves back together. We survived. That’s what makes us so powerful. And as for family—well, blood is always family, but family doesn’t always have to be blood.”

“Some people were matches, a bit of light and no heat. And some were furnaces, all heat but little light. And then, once in a blue moon, there was a bonfire, something so hot and bright you couldn’t stand too near without burning.”

“Men look at anyone with power and see only a threat, an obstacle in their path. They never have the sense to see power for what it really is. Potential.” 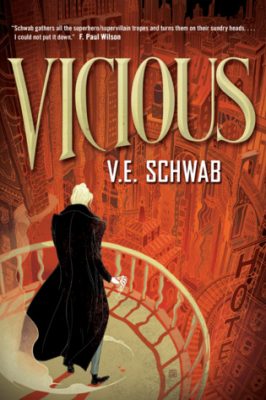 Synopsis:
Victor and Eli started out as college roommates—brilliant, arrogant, lonely boys who recognized the same sharpness and ambition in each other. In their senior year, a shared research interest in adrenaline, near-death experiences, and seemingly supernatural events reveals an intriguing possibility: that under the right conditions, someone could develop extraordinary abilities. But when their thesis moves from the academic to the experimental, things go horribly wrong.

Ten years later, Victor breaks out of prison, determined to catch up to his old friend (now foe), aided by a young girl whose reserved nature obscures a stunning ability. Meanwhile, Eli is on a mission to eradicate every other super-powered person that he can find—aside from his sidekick, an enigmatic woman with an unbreakable will. Armed with terrible power on both sides, driven by the memory of betrayal and loss, the archnemeses have set a course for revenge—but who will be left alive at the end?

Review:
I wasn’t overly thrilled with this prompt so I randomly picked this book to read because it was highly reviewed and boy am I so glad I did. I absolutely LOVED this book! It reminded me a little bit of the show Heroes, which I loved. It was well written, the hoping back and forth between time & characters was well done, and it kept me hooked from beginning to end. I never wanted to put it down. The whole time I was trying to decide which power I would want and I think I would have to choose Serena’s. To be able to make people do whatever you want, man that is tempting. I, of course, would use it for good. 🙂 While Victor is meant to be the villain I was on his side most of the book. I usually am for people doing bad if it is for the greater good but the lengths that Eli went to made me mad time and time again. Plus I love the relationship between Victor, Sydney, & Mitch so much. I can’t wait until the second book comes out next month. I already have it on hold at the library. I really want to see where the story goes.

Favorite Quotes:
“But these words people threw around – humans, monsters, heroes, villains – to Victor it was all just a matter of semantics. Someone could call themselves a hero and still walk around killing dozens. Someone else could be labeled a villain for trying to stop them. Plenty of humans were monstrous, and plenty of monsters knew how to play at being human.”

“When no one understands, that’s usually a good sign that you’re wrong.”

“The moments that define lives aren’t always obvious. They don’t always scream LEDGE, and nine times out of ten there’s no rope to duck under, no line to cross, no blood pact, no official letter on fancy paper. They aren’t always protracted, heavy with meaning.”