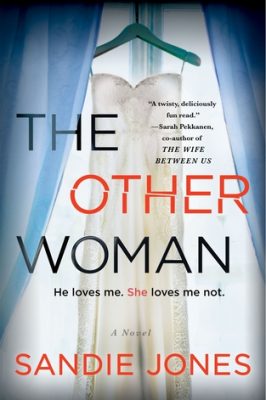 The Other Woman by Sandie Jones
Published by Minotaur Books on March 29th 2018
Genre: Mystery + Thriller + Suspense
Format: Hardcover
Pages: 304
Challenge Theme: A book with an item of clothing or accessory on the cover

Synopsis:
Emily thinks Adam’s perfect; the man she thought she’d never meet. But lurking in the shadows is a rival; a woman who shares a deep bond with the man she loves.

Emily chose Adam, but she didn’t choose his mother Pammie. There’s nothing a mother wouldn’t do for her son, and now Emily is about to find out just how far Pammie will go to get what she wants: Emily gone forever.

The Other Woman is an addictive, fast-paced psychological thriller about the destructive relationship between Emily, her boyfriend Adam, and his manipulative mother Pammie.

Review:
My first thought when reading this book was “this is in no way, shape, or form a thriller” and up until maybe 50 pages towards the end I kept thinking that. The twist in the end I 100% did not see coming so I guess that was thrilleresque but I still would never qualify this book as a thriller. That already made me not love the book. When it says thriller I want a thriller! I also could not stand Emily and how she stuck by Adam, not only because of his mother, but also because he was a giant asshole. Come on girl want better for yourself! The only part of the book I enjoyed was the twist. Usually I see them coming and this one I definitely did not. If you want a quick, easy read with a good twist then read this book. Just know you aren’t getting a true thriller & the characters will piss you off a lot of the time.

Favorite Quotes:
“There’s something about your mother’s voice that nobody else can replicate.”

“Sometimes things happen and you have no way of understanding them. You try to find a reason to justify it, but there isn’t always an answer. It’s just life.”

“It was just a beautiful meeting of two people who were utterly in tune with each other.”