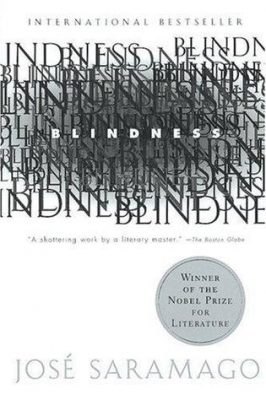 Synopsis:
A city is hit by an epidemic of “white blindness” that spares no one. Authorities confine the blind to an empty mental hospital, but there the criminal element holds everyone captive, stealing food rations and assaulting women. There is one eyewitness to this nightmare who guides her charges—among them a boy with no mother, a girl with dark glasses, a dog of tears—through the barren streets, and their procession becomes as uncanny as the surroundings are harrowing. As Blindness reclaims the age-old story of a plague, it evokes the vivid and trembling horrors of the twentieth century, leaving readers with a powerful vision of the human spirit that’s bound both by weakness and exhilarating strength.

Review:
This was one of my challenge books that I wasn’t looking forward too but I was pleasantly surprised and happy I chose it. The idea that you could be going about your day and all of a sudden go blind is terrifying. Unlike other science fiction books, the idea of a blindness epidemic passing from one person to the next like the flu doesn’t seem as unrealistic as aliens coming to earth or zombies taking over. Reading this book is frightening because you imagine what you would do if this happened to you. I found myself wondering what I would do and how I would survive.

I have to say the writing style took a while to get used to. There is not much punctuation, a lot of run-on sentences, it is hard at times to realize who is talking but after you get used to it you realize it helps to emphasize the panic that goes along with the story.

This book not only perfectly captures the disarray that comes with something as unknown and frightening as sudden blindness but also captures the beautiful side of humans who would not otherwise come together fighting to stay alive. At times it is disturbing, at times it gives you hope, at times it scares you. Definitely worth the read.

Favorite Quotes:
“Words are like that, they deceive, they pile up, it seems they do not know where to go, and, suddenly, because of two or three or four that suddenly come out, simple in themselves, a personal pronoun, an adverb, an adjective, we have the excitement of seeing them coming irresistibly to the surface through the skin and the eyes and upsetting the composure of our feelings, sometimes the nerves that can not bear it any longer, they put up with a great deal, they put up with everything, it was as if they were wearing armor, we might say.”

“When all is said and done, what is clear is that all lives end before their time.”

“If, before every action, we were to begin by weighing up the consequences, thinking about them in earnest, first the immediate consequences, then the probable, then the possible, then the imaginable ones, we should never move beyond the point where our first thought brought us to a halt. The good and evil resulting from our words and deeds go on apportioning themselves, one assumes in a reasonably uniform and balanced way, throughout all the days to follow, including those endless days, when we shall not be here to find out, to congratulate ourselves or ask for pardon, indeed there are those who claim that this is the much talked of immortality.”

“If I’m sincere today, what does it matter if I regret it tomorrow?”

“The difficult thing isn’t living with other people, it’s understanding them.”

“You never know beforehand what people are capable of, you have to wait, give it time, it’s time that rules, time is our gambling partner on the other side of the table and it holds all the cards of the deck in its hand, we have to guess the winning cards of life, our lives.”