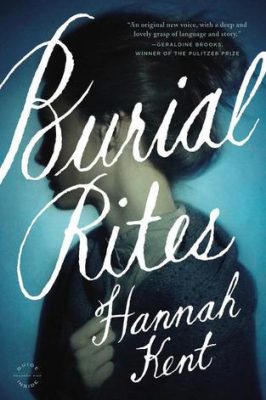 Synopsis:
A brilliant literary debut, inspired by a true story: the final days of a young woman accused of murder in Iceland in 1829.

Set against Iceland’s stark landscape, Hannah Kent brings to vivid life the story of Agnes, who, charged with the brutal murder of her former master, is sent to an isolated farm to await execution.

Horrified at the prospect of housing a convicted murderer, the family at first avoids Agnes. Only Tóti, a priest Agnes has mysteriously chosen to be her spiritual guardian, seeks to understand her. But as Agnes’s death looms, the farmer’s wife and their daughters learn there is another side to the sensational story they’ve heard.

Riveting and rich with lyricism, Burial Rites evokes a dramatic existence in a distant time and place, and asks the question, how can one woman hope to endure when her life depends upon the stories told by others?

Review:
This was a pretty depressing book. With that being said I really did enjoy it. It started off a little slow for me but once it got going I couldn’t put it down. My heart went out to Agnes more and more as the book went on. I went into the book knowing what the outcome would be, it was based on a true story, but I still wasn’t prepared for the final moments of Agnes’ life. It is beautifully written and you can tell that Kent really did her research. If you like historical fiction I would say read it, if that isn’t your thing you may struggle through it.

Favorites Quotes:
“To know what a person has done, and to know who a person is, are very different things.”

“I can turn to that day as though it were a page in a book. It’s written so deeply upon my mind I can almost taste the ink.”

“It’s not fair. People claim to know you through the things you’ve done, and not by sitting down and listening to you speak for yourself.”

“I remain quiet. I am determined to close myself to the world, to tighten my heart and hold what has not yet been stolen from me. I cannot let myself slip away. I will hold what I am inside, and keep my hands tight around all the things I have seen and heard, and felt.”

“It was only later that I suffocated under the weight of his arguments, and his darker thoughts articulated. It was only later that our tongues produced landslides, that we became caught in the cracks between what we said and what we meant, until we could not find each other, did not trust the words in our own mouths.”

“She made mistakes and others made up their minds about her. People around here don’t let you forget your misdeeds. They think them the only things worth writing down.”

“I preferred to read than talk with the others.”