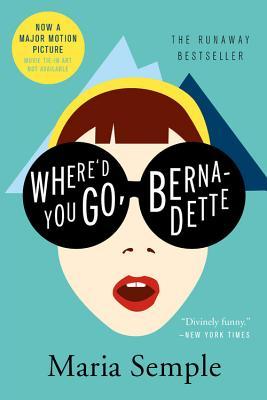 Where'd You Go, Bernadette by Maria Semple
Published by Little Brown and Company on August 14th 2012
Genre: Fiction
Format: Paperback
Pages: 368
Challenge Theme: A book with a question in the title

Synopsis:
Bernadette Fox is notorious. To her Microsoft-guru husband, she’s a fearlessly opinionated partner; to fellow private-school mothers in Seattle, she’s a disgrace; to design mavens, she’s a revolutionary architect, and to 15-year-old Bee, she is a best friend and, simply, Mom.

Then Bernadette disappears. It began when Bee aced her report card and claimed her promised reward: a family trip to Antarctica. But Bernadette’s intensifying allergy to Seattle–and people in general–has made her so agoraphobic that a virtual assistant in India now runs her most basic errands. A trip to the end of the earth is problematic.

To find her mother, Bee compiles email messages, official documents, secret correspondence–creating a compulsively readable and touching novel about misplaced genius and a mother and daughter’s role in an absurd world.

Review:
So this book was just ok to me. I will start with the things I did enjoy. I really liked the format of the first half of the book with the varying between narration from Bee to emails/memos/faxes all from different characters. At first I found it to be very confusing but once I got used to it I did enjoy it. I do feel, however, that it went on for a bit too long. The synopsis of this book makes it seem like the disappearing of Bernadette is the main plot of the story but that happens pretty late in the book. Going in I thought I was going to be reading a book about a daughter trying to find her mother but it was more about what led up to Bernadette disappearing. The middle part of the book, discussing Bernadette’s past, was just meh to me. I wanted to rush through that part. The last part of the book that finally delved into Bernadette’s disappearance held my interest, mainly because I wanted to know what happened to her. Unfortunately I found all that a little far fetched at the end of the day. The one story line I really did not like was the Soo-Lin & Elgie relationship. It felt like added fluff that wasn’t needed and quite frankly really bothered me as a reader. Final verdict: there was nothing I LOVED about this book but it was an entertaining enough read for the most part and I am interested to see what they do with the movie.

“That’s right,’ she told the girls. ‘You are bored. And I’m going to let you in on a little secret about life. You think it’s boring now? Well, it only gets more boring. The sooner you learn it’s on you to make life interesting, the better off you’ll be.”

“Just because it’s complicated, just because you think you can’t ever know everything about another person, it doesn’t mean you can’t try.”