Review: Out by Natsuo Kirino 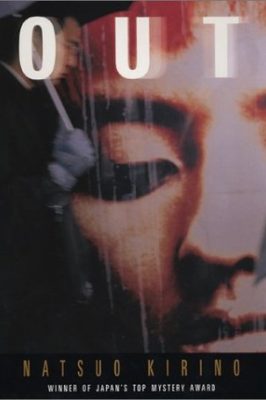 Synopsis:
Natsuo Kirino’s novel tells a story of random violence in the staid Tokyo suburbs, as a young mother who works a night shift making boxed lunches brutally strangles her deadbeat husband and then seeks the help of her co-workers to dispose of the body and cover up her crime.

The ringleader of this cover-up, Masako Katori, emerges as the emotional heart of Out and as one of the shrewdest, most clear-eyed creations in recent fiction. Masako’s own search for a way out of the straitjacket of a dead-end life leads her, too, to take drastic action.

The complex yet riveting narrative seamlessly combines a convincing glimpse into the grimy world of Japan’s yakuza with a brilliant portrayal of the psychology of a violent crime and the ensuing game of cat-and-mouse between seasoned detectives and a group of determined but inexperienced criminals. Kirino has mastered a Thelma and Louise kind of graveyard humor that illuminates her stunning evocation of the pressures and prejudices that drive women to extreme deeds and the friendship that bolsters them in the aftermath.

Review:
I have avoided reviewing this book because I am not sure how I feel about it. I enjoyed the first 80–85% of the book but the ending KILLED me. I could not stand how it wrapped up and when I don’t like an ending it kind of ruins the entire book for me. I did enjoy the characters a lot, there were different points where I both disliked and liked them…well except Kuniko, I couldn’t stand her the entire time. It was interesting to see the dark parts of Japan and how backwards it is in regards to women and their roles. That is why I was able to root for 3 of the women even knowing they did this horrific thing. However I could not find any positive in Kuniko as a character hence why I rooted for 3 of the women. Like I said I was invested up until the point of the Masako & Satake climax and then that is where the author lost me. The whole time Masako is the strong woman and I felt like that part of her was thrown away in the end. It just went too far for me and I feel like there were better options for these characters at the end. I am giving it 3 stars even though the ending was a huge disappointment because I did enjoy the majority of the book.