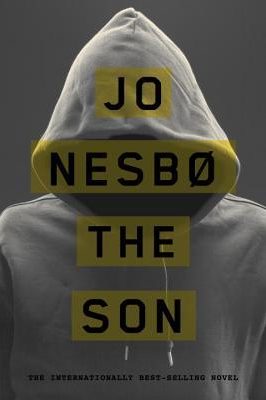 Synopsis:
Sonny Lofthus, in his early thirties, has been in prison for the last dozen years: serving time for crimes he didn’t commit. In exchange, he gets an uninterrupted supply of heroin—and the unexpected stream of fellow prisoners seeking out his uncanny abilities to soothe and absolve. His addiction started when his father committed suicide rather than be exposed as a corrupt cop, and now Sonny is the center of a vortex of corruption: prison staff, police, lawyers, a desperate priest—all of them focused on keeping him stoned and jailed, and all of them under the thumb of Oslo’s crime overlord, the Twin. When Sonny learns some long-hidden truths about his father he makes a brilliant escape, and begins hunting down the people responsible for the hideous crimes he’s paid for. But he’s also being hunted, by the Twin, the cops, and the only person who knows the ultimate truth that Sonny is seeking. The question is, what will he do when they’ve cornered him?

Review:
I saved this book for last this year because this was the prompt I was least excited about. I was pleasantly surprised. This book was a great thriller that kept my attention from the start. I read it in 2 days and it was a pretty lengthy book. It was one of those books where you are routing for the “bad guy” when you really shouldn’t be. I put bad guy in quotations because to me Sonny isn’t really a bad guy, he is more of an avenger, but he still kills people so if you believe people shouldn’t take the law into their own hands he would be considered a bad guy. I don’t want to give much away so I will just say I really enjoyed this book, I didn’t guess who the mole was, and I liked the ending. I will definitely check out more of Nesbo’s books.

Favorite Quotes:
“But there is always a point where things can no longer be put off, where you can’t be weak one more day and promise yourself that tomorrow, tomorrow you will start that other life.”

“Love’s the sum total of all the little things you can never really put your finger on. Love surrounds you like steam in the shower. You can’t see the individual drops but you get warm.”

“What determined the outcome of a life? A series of random events you had no control over, or did some cosmic gravity pull everything in the direction it was predestined to go?”

“What we humans think we know is nothing compared to what we need to believe to numb the fear and pain.”

Review: All the Bright Places by Jennifer Niven 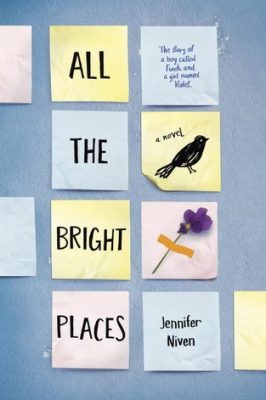 Synopsis:
Theodore Finch is fascinated by death, and he constantly thinks of ways he might kill himself. But each time, something good, no matter how small, stops him.

Violet Markey lives for the future, counting the days until graduation, when she can escape her Indiana town and her aching grief in the wake of her sister’s recent death.

When Finch and Violet meet on the ledge of the bell tower at school, it’s unclear who saves whom. And when they pair up on a project to discover the “natural wonders” of their state, both Finch and Violet make more important discoveries: It’s only with Violet that Finch can be himself—a weird, funny, live-out-loud guy who’s not such a freak after all. And it’s only with Finch that Violet can forget to count away the days and start living them. But as Violet’s world grows, Finch’s begins to shrink.

Review:
A lot of the time when I hear a book is comparable to another book I tend to roll my eyes, however the comparison of this book to Eleanor & Park and The Fault in Our Stars is pretty spot on. I love both those books so of course I loved All the Bright Places. I loved the story, I loved the writing, and I loved the characters especially Finch. Just they way he spoke made me smile and want to be his friend. Also the underlying current of mental illness/depression was written about so beautifully. I don’t want to give too much away so all I will say is definitely add this to your TBR list!

Favorite Quotes:
“You are all the colors in one, at full brightness.”

“We do not remember days, we remember moments.”

“The problem with people is they forget that most of the time it’s the small things that count.”

“You have been in every way all that anyone could be.… If anybody could have saved me it would have been you.”

“What if life could be this way? Only the happy parts, none of the terrible, not even the mildly unpleasant. What if we could just cut out the bad and keep the good? This is what I want to do with Violet – give her only the good, keep away the bad, so that good is all we ever have around us.”

“You deserve better. I can’t promise you I’ll stay around, not because I don’t want to. It’s hard to explain. I’m a fuckup. I’m broken, and no one can fix it. I’ve tried. I’m still trying. I can’t love anyone because it’s not fair to anyone who loves me back. I’ll never hurt you, not like I want to hurt Roamer. But I can’t promise I won’t pick you apart, piece by piece, until you’re in a thousand pieces, just like me. You should know what you’re getting into before getting involved.”

“You saved my life. Why couldn’t I save yours?”