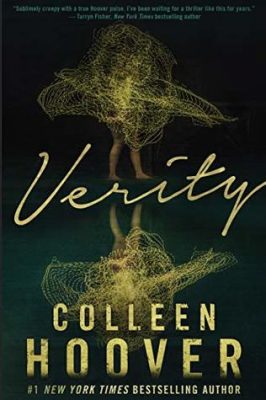 Verity by Colleen Hoover
Published by Indenpendently on December 10th 2018
Genre: Mystery + Thriller + Suspense
Format: Paperback
Pages: 314
Challenge Theme: A book you think should be turned into a movie

Synopsis:
Lowen Ashleigh is a struggling writer on the brink of financial ruin when she accepts the job offer of a lifetime. Jeremy Crawford, husband of bestselling author Verity Crawford, has hired Lowen to complete the remaining books in a successful series his injured wife is unable to finish.

Lowen arrives at the Crawford home, ready to sort through years of Verity’s notes and outlines, hoping to find enough material to get her started. What Lowen doesn’t expect to uncover in the chaotic office is an unfinished autobiography Verity never intended for anyone to read. Page after page of bone-chilling admissions, including Verity’s recollection of what really happened the day her daughter died.

Lowen decides to keep the manuscript hidden from Jeremy, knowing its contents would devastate the already grieving father. But as Lowen’s feelings for Jeremy begin to intensify, she recognizes all the ways she could benefit if he were to read his wife’s words. After all, no matter how devoted Jeremy is to his injured wife, a truth this horrifying would make it impossible for him to continue to love her.

Review:
I read 40 pages of this book day 1 and the other 274 pages on day 2. I stayed up about 2 hours past my bedtime because I could not put this book down. Verity is definitely not a traditional Colleen Hoover book but man it was just as good as my other favorites she has written. This is a messed up thriller to the max. It does still have some romantic elements but that is definitely not the focus of this novel. Once Lowen starts reading Verity’s autobiography you will not want to put the book down. I had to keep seeing what would happen next. The web Hoover weaves with this characters is tantalizing and (excuse my French) fucked up. Also the fact that something happens at the end that I did not see coming, not even a little bit, just made me go WOW!! A must read! When I chose this book for the movie prompt I had no idea if it would really be a good book to turn into a movie. That was based on the opinion of a book blogger on Instagram but I have to say after reading it I agree. This would make a great movie!

Favorite Quotes:
“I think the idea of me is better than the reality of me.”

“A writer should never have the audacity to write about themselves unless they’re willing to separate every layer of protection between the author’s soul and their book. The words should come directly from the center of the gut, tearing through flesh and bone as they break free. Ugly and honest and bloody and a little bit terrifying, but completely exposed.”

“It’s what you do when you’ve experienced the worst of the worst. You seek out people like you…people worse off than you…and you use them to make yourself feel better about the terrible things that have happened to you.”

“If we were friends, I would do something to comfort him. Maybe grab his hand and hold it. But there’s too much inside me that wants to be more than his friend, which means we can’t be friends at all. If an attraction is present between two people, those two people can only be one of two things. Involved or not involved. There is no in-between.”