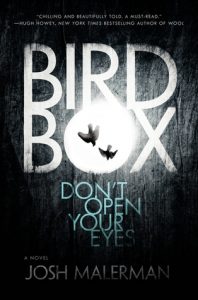 Synopsis:
Something is out there, something terrifying that must not be seen. One glimpse of it, and a person is driven to deadly violence. No one knows what it is or where it came from.

Five years after it began, a handful of scattered survivors remains, including Malorie and her two young children. Living in an abandoned house near the river, she has dreamed of fleeing to a place where they might be safe. Now that the boy and girl are four, it’s time to go, but the journey ahead will be terrifying: twenty miles downriver in a rowboat–blindfolded–with nothing to rely on but her wits and the children’s trained ears. One wrong choice and they will die. Something is following them all the while, but is it man, animal, or monster?

Interweaving past and present, Bird Box is a snapshot of a world unraveled that will have you racing to the final page.

Review:
After my busy birthday week I spent the entire weekend in pajamas doing absolutely nothing…and I loved it! Sunday I read this entire book in one sitting while Luke played Call of Duty. I didn’t intend to read the entire book in a day but it was just such a page turner. I love horror movies and scary books so this was right up my alley. I loved the concept of seeing a “monster” and just going on a complete murder spree. I enjoyed the jumping back and forth in time, it really worked in this book. The attic scene, which I consider to be the climax of this book, was so well written. I couldn’t read fast enough during that section. I did finish the book having so many questions but in this case it didn’t make me dislike the book, it made me like it more. It made me wanting more without feeling unsatisfied.

I think it is pretty cool that the author is the lead singer of the band The High Strung and I am impressed at this debut novel. I will definitely check out his other books!

Favorite Quotes:
“We left because some people choose to wait for news and others make their own.”

“It’s better to face madness with a plan than to sit still and let it take you in pieces.”

“How can she expect her children to dream as big as the stars if they can’t lift their heads to gaze upon them?”

Synopsis:
A tale of family, ghosts, secrets, and mystery, in which the lives of the living and the dead intersect in shocking, surprising, and moving ways.

Wealthy Richard Walker has just died, leaving behind his country house full of rooms packed with the detritus of a lifetime. His estranged family—bitter ex-wife Caroline, troubled teenage son Trenton, and unforgiving daughter Minna—have arrived for their inheritance.

But the Walkers are not alone. Prim Alice and the cynical Sandra, long dead former residents bound to the house, linger within its claustrophobic walls. Jostling for space, memory, and supremacy, they observe the family, trading barbs and reminiscences about their past lives. Though their voices cannot be heard, Alice and Sandra speak through the house itself—in the hiss of the radiator, a creak in the stairs, the dimming of a light bulb.

The living and dead are each haunted by painful truths that will soon surface with explosive force. When a new ghost appears, and Trenton begins to communicate with her, the spirit and human worlds collide—with cataclysmic results.

Review:
I loved Lauren Oliver’s book Before I Fall so when I started this book I had high hopes. The synopsis sounded interesting and the first couple chapters I really enjoyed. Unfortunately it did not live up to my hopes, which is so disappointing because it had so much potential.

There are books where at the start you don’t like the main characters but because of the writing or the story line you grow to understand them or even like them. This was not that book. After a few chapters I couldn’t stand the characters. I think a lot of that had to do with what I can only describe at times as vulgar writing. I am not one to get offended easily and don’t mind crass writing if it contributes to the story but this did not. I also couldn’t stand how these characters acted and the decisions they made.

There were also so many story lines that were all over the place and didn’t get the details they deserved. The author was trying to do too much in 320 pages. The ending felt rushed like she was trying to tie up too many loose ends. This is Lauren Oliver’s only adult novel and I think she should stick to YA books.

Favorite Quotes:
“It was unfair that people could pretend to be one thing when they were really something else. That they would get you on their side and then do nothing but fail, and fail, and fail again. People should come with warnings, like cigarette packs: involvement would kill you over time.”

“Memory is as thick as mud. It rises up, it overwhelms. It sucks you down and freezes you where you stand. Thrash and kick and gnash your teeth. There’s no escaping it.”

“But that’s the beauty of life: time is yours to keep and to change. Just a few minutes can be sufficient to carve a new road, a new track”