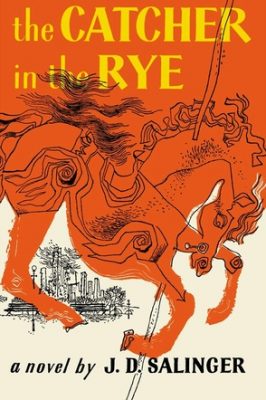 The Catcher in the Rye by J.D. Salinger
Published by Brown and Company on July 16th 1951
Genre: Classics
Format: Paperback
Pages: 277
Challenge Theme: A book you were supposed to read in school but havent yet

Synopsis:
The hero-narrator of The Catcher in the Rye is an ancient child of sixteen, a native New Yorker named Holden Caulfield. Through circumstances that tend to preclude adult, secondhand description, he leaves his prep school in Pennsylvania and goes underground in New York City for three days. The boy himself is at once too simple and too complex for us to make any final comment about him or his story. Perhaps the safest thing we can say about Holden is that he was born in the world not just strongly attracted to beauty but, almost, hopelessly impaled on it. There are many voices in this novel: children’s voices, adult voices, underground voices-but Holden’s voice is the most eloquent of all. Transcending his own vernacular, yet remaining marvelously faithful to it, he issues a perfectly articulated cry of mixed pain and pleasure. However, like most lovers and clowns and poets of the higher orders, he keeps most of the pain to, and for, himself. The pleasure he gives away, or sets aside, with all his heart. It is there for the reader who can handle it to keep.

Review:
I am pretty sure anyone who went to high school was assigned this book at some point. I know I was and I know I didn’t read it. After reading it as an adult I am so surprised they assign this book to younger kids. I wanted to love this book, because it is so coveted, but I thought it was just ok. Maybe it is because I could not relate to Holden, not even a little bit, and I found him to be whiny and annoying. I will say I loved the writing but when you can’t stand the main character it makes it hard to love the book. I did love the background of New York during that time but I am obsessed with NY so me liking the setting is a give in. I wish I could rate it better but I just didn’t really like it.

Favorite Quotes:
“What really knocks me out is a book that, when you’re all done reading it, you wish the author that wrote it was a terrific friend of yours and you could call him up on the phone whenever you felt like it. That doesn’t happen much, though.”

“Among other things, you’ll find that you’re not the first person who was ever confused and frightened and even sickened by human behavior. You’re by no means alone on that score, you’ll be excited and stimulated to know. Many, many men have been just as troubled morally and spiritually as you are right now. Happily, some of them kept records of their troubles. You’ll learn from them—if you want to. Just as someday, if you have something to offer, someone will learn something from you. It’s a beautiful reciprocal arrangement. And it isn’t education. It’s history. It’s poetry.”

“I like it when somebody gets excited about something. It’s nice.”

“Certain things, they should stay the way they are. You ought to be able to stick them in one of those big glass cases and just leave them alone.”

“Make sure you marry someone who laughs at the same things you do.”