Review: Paris for One & Other Stories by Jojo Moyes 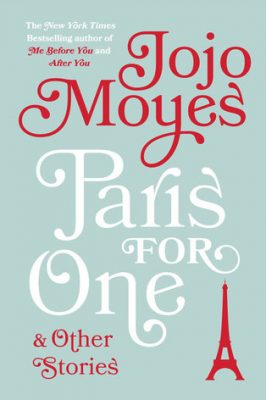 Synopsis:
From the #1 “New York Times” bestselling author of “Me Before You” and “After You,” a sensational collection featuring the title novella and eight other stories. Quintessential Jojo Moyes, “Paris for One and Other Stories” is an irresistibly romantic collection filled with humor and heart.
Nell is twenty-six and has never been to Paris. She’s never even been on a romantic weekend away to anywhere before. Everyone knows traveling abroad isn’t really her thing. But when Nell’s boyfriend fails to show up for their romantic mini-vacation, she has the opportunity to prove everyone including herself wrong. Alone and in Paris, Nell uncovers a version of herself she never knew existed: independent and intrepid. Could this turn out to be the most adventurous weekend of her life? Funny, charming, and irresistible, “Paris for One”is vintage Moyes as are the other stories that round out the collection.”

Paris for One
Between the Tweets
Love in the Afternoon
A Bird in the Hand
Crocodile Shoes
Holdups
Last Year’s Coat
Thirteen Days with John C.
The Christmas List

Review:
As I have said before I LOVE Jojo Moyes but I did not love this compilation of short stories. They were just ok and that has a lot to do with me just not really liking short stories. I always want more. I did like the main story, “Paris for One” and that is probably because it felt like it has a beginning, substantial middle, and an ending. A few of the other shorter stories I enjoyed but they just didn’t have enough substance for me.

Ones I could do without:
Love in the Afternoon
A Bird in the Hand
Holdups

Favorite Quotes:
“Are you still with this man?
On no, She sniffed. I realized pretty quickly I couldn’t marry a man without a bookshelf.
No bookshelf?
In his house. Not even a little one in his loo for the Reader’s Digest.
Many people in this country don’t read books.
He didn’t have one book. Not even a true crime. Or a Jeffrey Archer. I mean, what does that tell you about someone’s character?”

“Nell, I realize we hardly know each other, and I understand that you said it would ruin everything, but…I have thought about you so much…You see, I don’t think you were my mistake. I think you may be my best thing.”