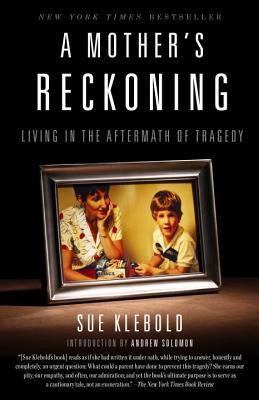 Synopsis:
On April 20, 1999, Eric Harris and Dylan Klebold walked into Columbine High School in Littleton, Colorado. Over the course of minutes, they would kill twelve students and a teacher and wound twenty-four others before taking their own lives.

For the last sixteen years, Sue Klebold, Dylan’s mother, has lived with the indescribable grief and shame of that day. How could her child, the promising young man she had loved and raised, be responsible for such horror? And how, as his mother, had she not known something was wrong? Were there subtle signs she had missed? What, if anything, could she have done differently?

These are questions that Klebold has grappled with every day since the Columbine tragedy. In A Mother’s Reckoning, she chronicles with unflinching honesty her journey as a mother trying to come to terms with the incomprehensible. In the hope that the insights and understanding she has gained may help other families recognize when a child is in distress, she tells her story in full, drawing upon her personal journals, the videos and writings that Dylan left behind, and on countless interviews with mental health experts.

Filled with hard-won wisdom and compassion, A Mother’s Reckoning is a powerful and haunting book that sheds light on one of the most pressing issues of our time. And with fresh wounds from the Newtown and Charleston shootings, never has the need for understanding been more urgent.

Review:
I remember the Columbine shooting like it was yesterday. I was a junior in high school and couldn’t imagine if something like that were to happen at my school. That was also a time where things like that just weren’t the norm like they, unfortunately, are in our society today. Back then it was shocking, now we are sad but never surprised by the mass shootings that happen in our country. When it comes to a child committing these atrocities the first thing people want to do is point a finger at the parents. While that is a natural reaction, and in some case a legitimate cause, it is often misplaced blame. I am sure writing this book was beyond difficult for Sue. Not only have to relive that time but also the oppositions she must have gotten from others and the backlash for people who believe she shouldn’t profit from this story. All the book proceeds are being donated to causes that help research and focus on mental health so in reality she is doing this to HELP other parents and I commend her for that. I really enjoyed reading her insight and I know that this book will help parents to recognize these own traits in their children, hopefully before it is too late. Mental health research and care is severely lacking in this country so if this book can help just one parent be able to reach out and help their child then it was worth the struggle to write it and backlash she probably got for doing so. It also helped to make me realize that first and foremost Dylan was someone’s son and to think that his parent couldn’t or shouldn’t mourn for him, no matter what awful act he committed, just isn’t right. This book helps open your eyes from the perspective of a parent for, who all intents and purposes, provided a near perfect upbringing and yet her child still did the unthinkable. Definitely worth the read.

There was one page in this book that really stood out to me in regards to how the media treats these stories versus how they SHOULD treat these stories. It is a little lengthy but it is exactly how I feel every time a mass shooting happens and I watch how the media makes it worse:

“Meg Moritz, a journalist and professor who was looked closely at the media coverage of Columbine, reminded me that the journalists in question are often making split-second decisions under less-than-optimal circumstances. Even so, it’s not unreasonable to expect legitimate news organizations to follow best-practice guidelines.

Many of these guidelines are “don’ts.” Don’t show images of the shooter, particularly ones of him with weapons, or in the outfit he chose to carry out the massacre. Don’t show the weapons used, or other evidence. Don’t endlessly repeat the name of the shooter; instead, refer to “the killer” or “the perpetrator.” Don’t give airtime or publish the videos they make (like the Basement Tapes) or manifestos posted to their social media accounts. Don’t compare the killer to other killers, particularly by putting emphasis on how many people they have killed. Tufekci believe that numbers-how many dead and injured, the number of bullets fired-and photographs are particularly inflammatory, as they provide a benchmark for competition. Don’t sensationalize the violence or the body count-“the most people killed and injured in the country’s history!” Don’t oversimply the motivations behind the act.

Most important, don’t inadvertently makes heroes of the killers. It seems obvious, and yet when an event like this happens, you can’t avoid detailed (and, I would argue, fetishistic) descriptions of the weapons used, how the killers hid their arsenals, what they did and ate on that fateful day, exactly what they wore. Their names become household names. We know their favorite foods, video games, movies, and bands. These details may eventually emerge, of course; leaks happen, and the Internet is the Internet. But it these images and details accelerate and inspire violence, then they should not be endlessly repeated on CNN.”

Favorite Quotes:
“The ultimate message of this book is terrifying: you may not know your own children, and, worse yet, your children may be unknowable to you. The stranger you fear may be your own son or daughter.”

“We teach our kids the importance of good dental care, proper nutrition, and financial responsibility. How many of us teach our children to monitor their own brain health, or know how to do it ourselves?”

“I would ask him to forgive me, for being his mother and never knowing what was going on inside his head, for not being able to help him, for not being the person that he could confide in.”

“Asking ‘why’ only makes us feel hopeless. Asking ‘how’ points the way forward, and shows us what we must do”

“I failed to understand as a parent until it was too late: that anyone can be suffering and in need of expert care, regardless of how they act, what they say, or who they are. Those who are suffering can appear for all the world to be doing well, their private pain masked by accomplishments and triumphs.”

“Hatred does not obliterate love. Indeed, the two are in constant fellowship.”