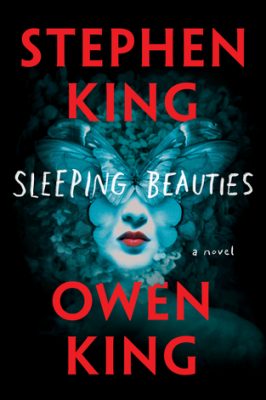 Synopsis:
In a future so real and near it might be now, something happens when women go to sleep; they become shrouded in a cocoon-like gauze. If they are awakened, if the gauze wrapping their bodies is disturbed or violated, the women become feral and spectacularly violent; and while they sleep they go to another place. The men of our world are abandoned, left to their increasingly primal devices. One woman, however, the mysterious Evie, is immune to the blessing or curse of the sleeping disease. Is Evie a medical anomaly to be studied, or is she a demon who must be slain?

Review:
This is my first time reading a Stephen King book. I have a ton of them on my TBR list but I am always intimidated by the length of his books that I never pick them to read. The only reason I picked this one was because it fit my reading challenge and I wanted to finally read one of this books. I have been reading the reviews and they are very mixed. I think because I am new to King’s books I have a different opinion than those who read his books religiously. I really enjoyed this book. What I will say is that this is considered a horror book and I found it to be more fantasy. There were a lot of religious (tree, snake, Eve) and political (women’s rights, police shootings of unarmed black men and women, sexual assault) references throughout the book which I thought added a lot of texture to the story. I know a lot of people don’t want politics in their reading but the way it was done, in my opinion, was perfect. I won’t get too much into that because as much I don’t mind reading about politics I don’t like talking about it in today’s climate. It makes my blood boil nowadays haha. Overall I loved the story concept and it kept my interest throughout the entire book. It took me longer than I like but it was also double the size of the books I usually read.

After I was done I went to research how Stephen & Owen wrote the book together and the process is pretty fascinating. They live in different states so Stephen would write a section and send it to Owen. Then Owen would give his notes and then write another section then send it back to his dad. This went on until the book was done. I am still wondering who wrote which parts. It went together so well that I would never think it was two different people writing it. I would love for them to collaborate again.

“The snake said nothing in return. Snakes do not need to justify their behavior.”

“Mothers were naturals for law enforcement, because toddlers, like criminals, were often belligerent and destructive.”

“When had men not been mystified by women? They were the magic that men dreamed of, and sometimes their dreams were nightmares.”