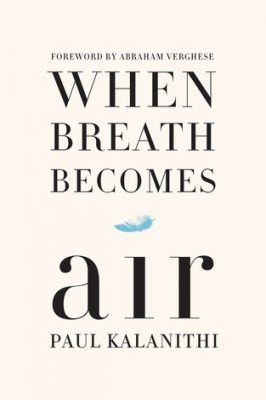 Synopsis:
At the age of thirty-six, on the verge of completing a decade’s worth of training as a neurosurgeon, Paul Kalanithi was diagnosed with stage IV lung cancer. One day he was a doctor treating the dying, and the next he was a patient struggling to live. And just like that, the future he and his wife had imagined evaporated. When Breath Becomes Air chronicles Kalanithi’s transformation from a naïve medical student “possessed,” as he wrote, “by the question of what, given that all organisms die, makes a virtuous and meaningful life” into a neurosurgeon at Stanford working in the brain, the most critical place for human identity, and finally into a patient and new father confronting his own mortality.

What makes life worth living in the face of death? What do you do when the future, no longer a ladder toward your goals in life, flattens out into a perpetual present? What does it mean to have a child, to nurture a new life as another fades away? These are some of the questions Kalanithi wrestles with in this profoundly moving, exquisitely observed memoir.

Paul Kalanithi died in March 2015, while working on this book, yet his words live on as a guide and a gift to us all. “I began to realize that coming face to face with my own mortality, in a sense, had changed nothing and everything,” he wrote. “Seven words from Samuel Beckett began to repeat in my head: ‘I can’t go on. I’ll go on.'” When Breath Becomes Air is an unforgettable, life-affirming reflection on the challenge of facing death and on the relationship between doctor and patient, from a brilliant writer who became both.

Review:
I really, really enjoyed this book. Paul was not only a neurosurgeon, he was also a gifted writer. To be able to be so present and accepting of his fate was very powerful to me. When you get a diagnosis of terminal cancer you can either let it ruin what time you have left or you can embrace it and make the most of the time you have left. He not only embraced it he wrote a beautiful novel while going through it. Of course this book is emotional but it is so much more than that. It is a glimpse into how you can make your life matter. I also love that his wife chose to write the afterward to close the book that Paul didn’t get to finish.

Favorite Quotes:
“Human knowledge is never contained in one person. It grows from the relationships we create between each other and the world, and still it is never complete.”

“That message is simple: When you come to one of the many moments in life when you must give an account of yourself, provide a ledger of what you have been, and done, and meant to the world, do not, I pray, discount that you filled a dying man’s days with a sated joy, a joy unknown to me in all my prior years, a joy that does not hunger for more and more, but rests, satisfied. In this time, right now, that is an enormous thing.”

“There is a moment, a cusp, when the sum of gathered experience is worn down by the details of living. We are never so wise as when we live in this moment.”

“The tricky part of illness is that, as you go through it, your values are constantly changing. You try to figure out what matters to you, and then you keep figuring it out. It felt like someone had taken away my credit card and I was having to learn how to budget. You may decide you want to spend your time working as a neurosurgeon, but two months later, you may feel differently. Two months after that, you may want to learn to play the saxophone or devote yourself to the church. Death may be a one-time event, but living with terminal illness is a process.”

“The physician’s duty is not to stave off death or return patients to their old lives, but to take into our arms a patient and family whose lives have disintegrated and work until they can stand back up and face, and make sense of, their own existence.”

“Grand illnesses are supposed to be life-clarifying. Instead, I knew I was going to die—but I’d known that before. My state of knowledge was the same, but my ability to make lunch plans had been shot to hell. The way forward would seem obvious, if only I knew how many months or years I had left. Tell me three months, I’d spend time with family. Tell me one year, I’d write a book. Give me ten years, I’d get back to treating diseases. The truth that you live one day at a time didn’t help: What was I supposed to do with that day?”