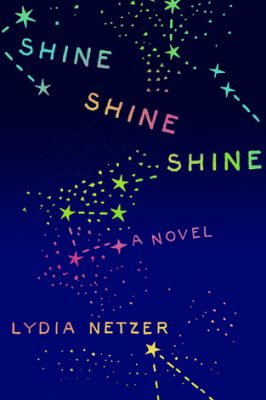 Synopsis:
A debut unlike any other, Shine, Shine, Shine is a shocking, searing, breathless love story, a gripping portrait of modern family, and a stunning exploration of love, death and what it means to be human.

Sunny Mann has masterminded a life for herself and her family in a quiet Virginia town. Her house and her friends are picture-perfect. Even her genius husband, Maxon, has been trained to pass for normal. But when a fender bender on an average day sends her coiffed blonde wig sailing out the window, her secret is exposed. Not only is she bald, Sunny is nothing like the Stepford wife she’s trying to be. As her facade begins to unravel, we discover the singular world of Sunny, an everywoman searching for the perfect life, and Maxon, an astronaut on his way to colonize the moon.

Theirs is a wondrous, strange relationship formed of dark secrets, decades-old murders and the urgent desire for connection. As children, the bald, temperamental Sunny and the neglected savant Maxon found an unlikely friendship no one else could understand. She taught him to feel — helped him translate his intelligence for numbers into a language of emotion. He saw her spirit where others saw only a freak. As they grew into adults, their profound understanding blossomed into love and marriage.

But with motherhood comes a craving for normalcy that begins to strangle Sunny’s marriage and family. As Sunny and Maxon are on the brink of destruction, at each other’s throats with blame and fear of how they’ve lost their way, Maxon departs for the moon, where he’s charged with programming the robots that will build the fledgling colony. Just as the car accident jars Sunny out of her wig and into an awareness of what she really needs, an accident involving Maxon’s rocket threatens everything they’ve built, revealing the things they’ve kept hidden. And nothing will ever be the same.

Review:
I really, really wanted to like this book but sadly I did not. I was thisclose to quitting the book but I made myself push through. I hate not finishing a book! The idea of a love story between two “freaks” had the potential to be great but the author chose to make every single character damaged in some major way and it was just too much. The story was way too convoluted. I found myself being extremely annoyed with Sunny rather than rooting for her. Maxon & Bubber were the characters I was wanting to read more about but Sunny was the main focus and that really ruined it for me.

I understand the theme the author was trying to portray that no one is “normal” but she went way too far with these character’s stories trying to show that, to the point that it was beyond unrealistic. I found myself cringing at so many of the ridiculous story lines. I wouldn’t bother with this book.