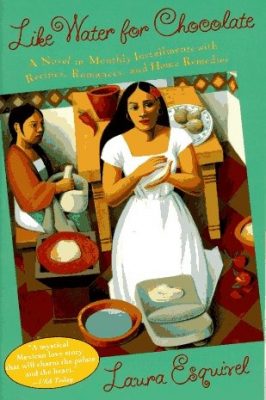 Like Water for Chocolate by Laura Esquivel
Published by Anchor on 1989
Genre: Fiction
Format: Paperback
Pages: 246
Challenge Theme: A book translated from another language

Synopsis:
Earthy, magical, and utterly charming, this tale of family life in turn-of-the-century Mexico became a best-selling phenomenon with its winning blend of poignant romance and bittersweet wit.

The number one bestseller in Mexico and America for almost two years, and subsequently a bestseller around the world, “Like Water For Chocolate” is a romantic, poignant tale, touched with moments of magic, graphic earthiness, bittersweet wit – and recipes.

A sumptuous feast of a novel, it relates the bizarre history of the all-female De La Garza family. Tita, the youngest daughter of the house, has been forbidden to marry, condemned by Mexican tradition to look after her mother until she dies. But Tita falls in love with Pedro, and he is seduced by the magical food she cooks. In desperation, Pedro marries her sister Rosaura so that he can stay close to her. For the next twenty-two years, Tita and Pedro are forced to circle each other in unconsummated passion. Only a freakish chain of tragedies, bad luck and fate finally reunite them against all the odds.

Review:
I am not really sure how I feel about this book. While I reading it I enjoyed it enough but there were some issues for me with some of the characters and the ending. Since I still don’t know how I feel I will rate it right down the middle with 3 stars.

Things I enjoyed: The recipes at the beginning of each chapter and how the preparation of the recipes was told throughout the chapter. I love cooking & food so it added an element that I enjoyed. I especially liked the idea that whatever you are feeling while you are cooking will somehow manifest in your food and make others feel that same thing when they eat it. I liked the magical qualities of the book. I will say that at the beginning they confused me because I didn’t realize what this book was really about. I picked it for my reading challenge without knowing much about it. The characters I liked were: Tita, Gertrudis, John, Nacha, & Chenca. I am also interested to see the movie and how they incorporate the magical elements into it.

Things I did not enjoy: Each chapter in this book is broken down into months but it spans over quite a few years so I didn’t really understand the correlation there. I also have never despised a character like I despise Mama Elena. She is just an awful, evil woman. Learning her story eventually I understood she had a hard life but the way she treats her daughter is despicable. I also could not stand Rosaura….woman you stole your sister’s one true love and you have the nerve to not like her? Ever heard of girl code? I also really didn’t like Pedro. I know he is Tita’s true love but I found him to be annoying and unremarkable as a love interest. I much prefer John for Tita over Pedro. Lastly WTF was that ending??? Without giving too much away I was not a fan of what happened to Tita & Pedro and also who got married at the end. I mean seriously? That was just weird.

Favorite Quotes:
“Each of us is born with a box of matches inside us but we can’t strike them all by ourselves; we need oxygen and a candle to help. In this case, the oxygen for example, would come from the breath of the person you love; the candle would be any kind of food, music, caress, word, or sound that engenders the explosion that lights one of the matches. For a moment we are dazzled by an intense emotion. A pleasant warmth grows within us, fading slowly as time goes by, until a new explosion comes along to revive it. Each person has to discover what will set off those explosions in order to live, since the combustion that occurs when one of them is ignited is what nourishes the soul. That fire, in short, is its food. If one doesn’t find out in time what will set off these explosions, the box of matches dampens, and not a single match will ever be lighted.”

“The simple truth is that the truth does not exist; it all depends on a person’s point of view.”

“Carefully studying the delicate form of the doll, she was thinking how easy it was to wish for things as a child. Then nothing seemed impossible. Growing up, one realizes how many things one cannot wish for, the things that are forbidden, sinful. Indecent.”