Review: We the Animals by Justin Torres 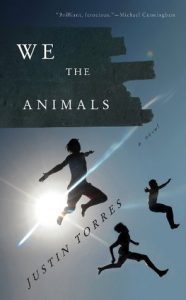 We the Animals by Justin Torres
Published by Houghton Mifflin Harcourt on August 30th 2011
Genre: Fiction
Format: Hardcover
Pages: 128
Challenge Theme: A book you can finish in a day

Synopsis:
Three brothers tear their way through childhood — smashing tomatoes all over each other, building kites from trash, hiding out when their parents do battle, tiptoeing around the house as their mother sleeps off her graveyard shift. Paps and Ma are from Brooklyn — he’s Puerto Rican, she’s white — and their love is a serious, dangerous thing that makes and unmakes a family many times.

Life in this family is fierce and absorbing, full of chaos and heartbreak and the euphoria of belonging completely to one another. From the intense familial unity felt by a child to the profound alienation he endures as he begins to see the world, this beautiful novel reinvents the coming-of-age story in a way that is sly and punch-in-the-stomach powerful.

Review:
When I googled “books that can be read in a day” this book kept coming up so that is why I chose to read it. It would have never been on my radar otherwise. From the start of this book I was hooked and I knew it would indeed only take me about a hour to read. The writing was beautiful & descriptive and the story made me feel the feels, mainly anger for these three boys. HOWEVER the story “The Night I am Made” towards the end of the book is where the author lost me. It left me saying wtf did I just read. It felt like so much of the important aspects of the narrator’s story got skipped over. I seriously thought I skipped a chapter or ten. Had the author written a longer book he may have been able to delve more into the lives of the three brothers and that would have made the book much more cohesive. I gave it 3 stars based on the fact that 75% of the book I really enjoyed. If I were to base the rating on just the end it would have gotten 1 star.

Favorite Quotes:
“We wanted more. We knocked the butt ends of our forks against the table, tapped our spoons against our empty bowls; we were hungry. We wanted more volume, more riots. We turned up the knob on the TV until our ears ached with the shouts of angry men. We wanted more music on the radio; we wanted beats; we wanted rock. We wanted muscles on our skinny arms. We had bird bones, hollow and light, and we wanted more density, more weight. We were six snatching hands, six stomping feet; we were brothers, boys, three little kings locked in a feud for more.”

“They weren’t scared, or dispossessed, or fragile. They were possible.”

“The son will not speak to her. She watches him, and she wants to tell him that he can put all his hate on her; she will take it all, if that’s what he needs her to do. Listen, really listen, and that’s what she is saying in her silence. The boy can’t help but hear.”

“…telling me how he had dreamt of kites-a whole sky full of kites, and he was holding all the strings. He told me how the good kites and wicked kites got all mixed up, how he tried to hold on to the good and let the rest float away, but after a while he couldn’t tell them apart.”