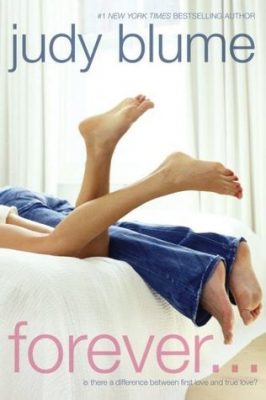 Synopsis:
Katherine and Michael meet at a New Year’s Eve party. They’re attracted to each other, they grow to love each other. And once they’ve decided their love is forever, they make love.

It’s the beginning of an intense and exclusive relationship, with a future all planned. Until Katherine’s parents insist that she and Michael put their love to the test with a summer apart…

Forever is written for an older age group than Judy Blume’s other novels for children. It caused a storm of controversy when it was first published because of its explicit sexual content.

Review:
For a little insight into why Judy Blume wrote this “controversial” book in the first place here is a quote from her, “This book was first published in 1975. My daughter Randy asked for a story about two nice kids who have sex without either of them having to die. She had read several novels about teenagers in love. If they had sex the girl was always punished—an unplanned pregnancy, a hasty trip to a relative in another state, a grisly abortion (illegal in the U.S. until the 1970’s), sometimes even death. Lies. Secrets. At least one life ruined. Girls in these books had no sexual feelings and boys had no feelings other than sexual. Neither took responsibility for their actions. I wanted to present another kind of story—one in which two seniors in high school fall in love, decide together to have sex, and act responsibly.“

Since this book was on the banned book list I was expecting something really bad (which it wasn’t) but then again in that time the topic of sex was more controversial than it is in this day and age. Now sexuality is thrown in our face and kids are learning about it earlier and earlier as the years go on. Would I let my 13 year step-daughter read this? Probably not, as it gives more details about sex than I am comfortable with her reading about, even though I am sure she already knows more than she should. Would I let my 16-17 year old daughter read it? Probably.

As far as a book goes it was ok. Quick, easy to read, and a cute story of high school love and all that comes along with that. It took me back to when I was in high school and thinking that I was with the person I would be with forever. As I was reading I was remembering feeling the exact same way Katherine felt while her relationship with Michael grew so it was fun to be brought back to that time.

Favorite Quotes:
“I made promises to you that I’m not sure I can keep. None of it has anything to do with you. It’s just that I don’t know what to do now. You must be thinking what a rotten person I am. Well, believe me, I’m thinking the same thing. I don’t know how this happened or why. Maybe I can get over it. Do you think you can wait—because I don’t want you to stop loving me. I keep remembering us and how it was. I don’t want to hurt you … not ever …”

“I wanted to tell him that I will never be sorry for loving him. That in a way I still do – that maybe I always will. I’ll never regret one single thing we did together because what we had was very special. Maybe if we were ten years older it would have worked out differently. Maybe. I think it’s just that I’m not ready for forever.”