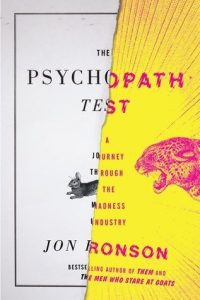 The Psychopath Test: A Journey Through the Madness Industry by Jon Ronson
Published by Riverhead Trade on May 1st 2012
Genre: Nonfiction-Psychology
Format: Hardcover
Pages: 275
Challenge Theme: A book about psychology

Synopsis:
They say one out of every hundred people is a psychopath. You probably passed on on the street today. These are people who have no empathy, are manipulative, deceitful, charming, seductive, and delusional. The Psychopath Test is the New York Times bestselling exploration of their world and the madness industry.

When Jon Ronson is drawn into an elaborate hoax played on some of the world’s top scientists, his investigation leads him, unexpectedly, to psychopaths. He meets an influential psychologist who is convinced that many important business leaders and politicians are in fact high-flying, high-functioning psychopaths, and teaches Ronson how to spot them. Armed with these new abilities, Ronson meets a patient inside an asylum for the criminally insane who insists that he’s sane, a mere run-of-the-mill troubled youth, not a psychopath– a claim that might be only manipulation, and a sign of his psychopathy. He spends time with a death-squad leader institutionalized for mortgage fraud, and a legendary CEO who took joy in shutting down factories and firing people. He delves into the fascinating history of psychopathy diagnosis and treatments, from LSD-fueled days-long naked therapy sessions in prisons to attempts to understand serial killers.

Along the way, Ronson discovers that relatively ordinary people are, more and more, defined by their most insane edges. The Psychopath Test is a fascinating adventure through the minds of madness.

Review:
There is something about psychology books that I love. More specifically books about mental disorders and the psyche of serial killers. Not really sure what that says about me but that’s ok, haha. I just find it all so interesting. I already have my next psychology book queued up. There isn’t much to review with this book. Ronson’s writing is great, he has a fun sense of humor throughout and he self-diagnoses himself with a number of disorders. I am curious to check out Bob Hare’s Psychopathy Checklist in more detail. I believe most people will have a least a couple traits but a true psychopath will have the majority of them. Know any psychopaths in your life?

Favorite Quotes:
“There is no evidence that we’ve been placed on this planet to be especially happy or especially normal. And in fact our unhappiness and our strangeness, our anxieties and compulsions, those least fashionable aspects of our personalities, are quite often what lead us to do rather interesting things.”

“Suddenly, madness was everywhere, and I was determined to learn about the impact it had on the way society evolves. I’ve always believed society to be a fundamentally rational thing, but what if it isn’t? What if it is built on insanity?”

“That’s an incredibly depressing thought,” I said “that if you’re in a room and at one end lies madness and at the other end lies sanity it is human nature to veer towards the madness end.”

“You’re standing on an escalator and you’re watching the people go past on the opposite escalator. If you could climb inside their brains you would see we aren’t all the same. We aren’t all good people just trying to do good. Some of us are psychopaths. And psychopaths are to blame for this brutal, misshapen society. They’re the rocks thrown into the still pond.”