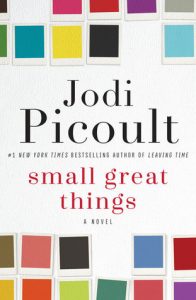 Synopsis:
Ruth Jefferson is a labor and delivery nurse at a Connecticut hospital with more than twenty years’ experience. During her shift, Ruth begins a routine checkup on a newborn, only to be told a few minutes later that she’s been reassigned to another patient. The parents are white supremacists and don’t want Ruth, who is African American, to touch their child. The hospital complies with their request, but the next day, the baby goes into cardiac distress while Ruth is alone in the nursery. Does she obey orders or does she intervene?

Ruth hesitates before performing CPR and, as a result, is charged with a serious crime. Kennedy McQuarrie, a white public defender, takes her case but gives unexpected advice: Kennedy insists that mentioning race in the courtroom is not a winning strategy. Conflicted by Kennedy’s counsel, Ruth tries to keep life as normal as possible for her family—especially her teenage son—as the case becomes a media sensation. As the trial moves forward, Ruth and Kennedy must gain each other’s trust, and come to see that what they’ve been taught their whole lives about others—and themselves—might be wrong.

Review:
Oh this book!! I love Jodi Picoult, she is one my favorite authors so I was excited to dive into her newest book and boy it did not disappoint. I was worried about the heavy subject matter, and I am sure she has had some critics from all sides about tackling the subject of racism, but she did it in such a way that people of any viewpoint can relate to it. Unfortunately there is still racism in today’s day and when I read Turk’s chapters I was appalled by what I was reading. Not because of the way it was written but for the mere fact that thoughts like his are still out there in the world. You can tell Picoult did her research in order to be able to write this book and write it so well. I don’t usually read the author’s notes at the end of the novel but I was so curious about her process with this book and what inspired her to write it.

Bottom line this is a MUST READ for anyone who is a Picoult fan, anyone who wants to educate themselves, anyone who loves a good read, anyone. This is a book that will stay with you for a while, for better or worse.

Favorite Quotes:
“If I cannot do great things, I can do small things in a great way.”

“What if the puzzle of the world was a shape you didn’t fit into? And the only way to survive was to mutilate yourself, carve away your corners, sand yourself down, modify yourself to fit? How come we haven’t been able to change the puzzle instead?”

“Equality is treating everyone the same. But equity is taking differences into account, so everyone has a chance to succeed.”

“Active racism is telling a nurse supervisor that an African American nurse can’t touch your baby. It’s snickering at a black joke. But passive racism? It’s noticing there’s only one person of color in your office and not asking your boss why. It’s reading your kid’s fourth-grade curriculum and seeing that the only black history covered is slavery, and not questioning why. It’s defending a woman in court whose indictment directly resulted from her race…and glossing over that fact, like it hardly matters.”

“Babies are such blank slates. They don’t come into this world with the assumptions their parents have made, or the promises their church will give, or the ability to sort people into groups they like and don’t like. They don’t come into this world with anything, really, except a need for comfort. And they will take it from anyone, without judging the giver. I wonder how long it takes before the polish given by nature gets worn off by nurture.”

“What if, ladies and gentlemen, today I told you that anyone here who was born on a Monday, Tuesday, or Wednesday was free to leave right now? Also, they’d be given the most central parking spots in the city, and the biggest houses. They would get job interviews before others who were born later in the week, and they’d be taken first at the doctor’s office, no matter how many patients were waiting in line. If you were born from Thursday to Sunday, you might try to catch up – but because you were straggling behind, the press would always point to how inefficient you are. And if you complained, you’d be dismissed for playing the birth-day card.” I shrug. “Seems silly, right? But what if on top of these arbitrary systems that inhibited your chances for success, everyone kept telling you that things were actually pretty equal?”