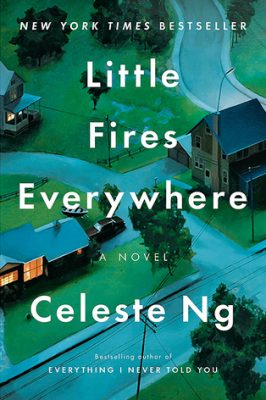 Little Fires Everywhere by Celeste Ng
Published by Penguin Books on September 12th 2017
Genre: Fiction
Format: Hardcover
Pages: 338
Challenge Theme: A book that was being read by a stranger in a public place

Synopsis:
Everyone in Shaker Heights was talking about it that summer: how Isabelle, the last of the Richardson children, had finally gone around the bend and burned the house down.

In Shaker Heights, a placid, progressive suburb of Cleveland, everything is meticulously planned – from the layout of the winding roads, to the colors of the houses, to the successful lives its residents will go on to lead. And no one embodies this spirit more than Elena Richardson, whose guiding principle is playing by the rules.

Enter Mia Warren – an enigmatic artist and single mother – who arrives in this idyllic bubble with her teenage daughter Pearl, and rents a house from the Richardsons. Soon Mia and Pearl become more than just tenants: all four Richardson children are drawn to the alluring mother-daughter pair. But Mia carries with her a mysterious past, and a disregard for the rules that threatens to upend this carefully ordered community.

When the Richardsons’ friends attempt to adopt a Chinese-American baby, a custody battle erupts that dramatically divides the town and puts Mia and Mrs. Richardson on opposing sides. Suspicious of Mia and her motives, Mrs. Richardson becomes determined to uncover the secrets in Mia’s past. But her obsession will come at unexpected and devastating costs to her own family – and Mia’s.

Little Fires Everywhere explores the weight of long-held secrets and the ferocious pull of motherhood-and the danger of believing that planning and following the rules can avert disaster, or heartbreak.

Review:
My book club was reading this book and then I saw someone reading it in public (which is the prompt) so I knew I had to read it. I really enjoyed it, although it was a bit slow paced for me. I found the depth of the characters great but part of me felt it could have been a few different books. Between the dynamic of the Richardson family, the background of Mia and Pearl, & the custody battle for Mirabelle McCullough/May Ling Chow I felt Ng could have written three different novels. Things did get wrapped up nicely together but I just feel more could have been given to each individual story. I guess the fact that I wanted more from each story shows I really did enjoy the book. I found myself torn between what was best for Mirabelle McCullough/May Ling Chow and I still don’t know which side I fall on. I see both sides. Maybe it is because I was adopted by a family who gave me way more than my father could have, although my circumstance is WAY different than this one. I do have to say I feel what Mia did was absolutely wrong and never could I side with her. She made the choice to be a surrogate, Pearl was not hers to keep. I couldn’t even imagine the pain that caused the Ryans and for Pearl to not know, just unforgivable in my eyes. Up until that point I really liked Mia too, it was disappointing. I have to say throughout the book I both liked and disliked mostly every character at points so that made it that much more engaging for me. Definitely worth the read.

Favorite Quotes:
“Sometimes you need to scorch everything to the ground, and start over. After the burning the soil is richer, and new things can grow. People are like that, too. They start over. They find a way.”

“Most of the time, everyone deserves more than one chance. We all do things we regret now and then. You just have to carry them with you.”

“One had followed the rules, and one had not. But the problem with rules… was that they implied a right way and a wrong way to do things. When, in fact, most of the time they were simply ways, none of them quite wrong or quite right, and nothing to tell you for sure what side of the line you stood on.”

“All her life, she had learned that passion, like fire, was a dangerous thing. It so easily went out of control. It scaled walls and jumped over trenches. Sparks leapt like fleas and spread as rapidly; a breeze could carry embers for miles. Better to control that spark and pass it carefully from one generation to the next, like an Olympic torch. Or, perhaps, to tend it carefully like an eternal flame: a reminder of light and goodness that would never – could never – set anything ablaze. Carefully controlled. Domesticated. Happy in captivity. The key, she thought, was to avoid conflagration.”

“It terrifies you. That you missed out on something. That you gave up something you didn’t know you wanted.” A sharp, pitying smile pinched the corners of her lips. “What was it? Was it a boy? Was it a vocation? Or was it a whole life?”

“All up and down the street the houses looked like any others—but inside them were people who might be happy, or taking refuge, or steeling themselves to go out into the world, searching for something better. So many lives she would never know about, unfolding behind those doors.”

“Maybe at birth everyone should be given to a family of a different race to be raised. Maybe that would solve racism once and for all.”

“She smelled of home…as if home had never been a place, but had always been this little person whom she’d carried alongside her.”