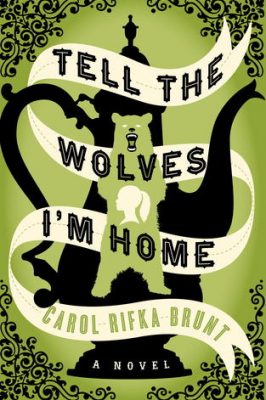 Synopsis:
1987. There’s only one person who has ever truly understood fourteen-year-old June Elbus, and that’s her uncle, the renowned painter Finn Weiss. Shy at school and distant from her older sister, June can only be herself in Finn’s company; he is her godfather, confidant, and best friend. So when he dies, far too young, of a mysterious illness her mother can barely speak about, June’s world is turned upside down. But Finn’s death brings a surprise acquaintance into June’s life – someone who will help her to heal, and to question what she thinks she knows about Finn, her family, and even her own heart.

At Finn’s funeral, June notices a strange man lingering just beyond the crowd. A few days later, she receives a package in the mail. Inside is a beautiful teapot she recognizes from Finn’s apartment, and a note from Toby, the stranger, asking for an opportunity to meet. As the two begin to spend time together, June realizes she’s not the only one who misses Finn, and if she can bring herself to trust this unexpected friend, he just might be the one she needs the most.

Review:
I finished this book about a week ago and realized I never reviewed it. Not sure if that says anything about whether I liked it or not. I will say I thought this book was just so so. It had a lot more potential than it ended up showing. I would have preferred a whole book dedicated to Finn & Toby so I guess you could say the prequel to this novel. The book addresses the important topic of AIDS and the stigma that was associated with the disease back in the 80s. Even knowing how people treated the disease back then I am still always so shocked when I read about how misinformed people were. It makes me extremely sad to know how badly people were ostracized because they had this disease. Aside from that I loved the relationship between June & Greta because it was so real but otherwise most characters and the story fell flat for me. June come off as irresponsible and dumb, Greta came off as mean (once I understood why she was this way I accepted it but that wasn’t until the very end), their mother is awful (how can you discard the one person your brother loved the most at a time when he needed family), and the father just wasn’t around. I know times were different back then but the fact that June was able to befriend Toby, travel to the city, skip school, go to high school parties all without the knowledge of her parents is absentee parenting at its best. I know some people might find June relationship’s with Finn creepy but at that age it is perfectly normal to have crushes on people who are important to you, family or not. Finn never seemed to be inappropriate with June. I can’t say the same for Toby. There were times where I cringed a bit at his relationship with June. Not necessarily in a sexual nature but just for the fact that he was allowing her to come visit, letting her drink and smoke, all the while knowing her age and how her parents felt about him. I found this to be inappropriate. Like I said overall this book was just ok for me, it took my longer to read than it should have. There were moments of light which is why I rated it down the middle at 3.

Favorite Quotes:
“Maybe I was destined to forever fall in love with people I couldn’t have. Maybe there’s a whole assortment of impossible people waiting for me to find them. Waiting to make me feel the same impossibility over and over again.”

“I really wondered why people were always doing what they didn’t like doing. It seemed like life was a sort of narrowing tunnel. Right when you were born, the tunnel was huge. You could be anything. Then, like, the absolute second after you were born, the tunnel narrowed down to about half that size. You were a boy, and already it was certain you wouldn’t be a mother and it was likely you wouldn’t become a manicurist or a kindergarten teacher. Then you started to grow up and everything you did closed the tunnel in some more. You broke your arm climbing a tree and you ruled out being a baseball pitcher. You failed every math test you ever took and you canceled any hope of being a scientist. Like that. On and on through the years until you were stuck. You’d become a baker or a librarian or a bartender. Or an accountant. And there you were. I figured that on the day you died, the tunnel would be so narrow, you’d have squeezed yourself in with so many choices, that you just got squashed.”

“That’s what being shy feels like. Like my skin is too thin, the light too bright. Like the best place I could possibly be is in a tunnel far under the cool, dark earth. Someone asks me a question and I stare at them, empty-faced, my brain jammed up with how hard I’m trying to find something interesting to say. And in the end, all I can do is nod or shrug, because the light of their eyes looking at me, waiting for me, is just too much to take. And then it’s over and there’s one more person in the world who thinks I’m a complete and total waste of space.
The worst thing is the stupid hopefulness. Every new party, every new bunch of people, and I start thinking that maybe this is my chance. That I’m going to be normal this time. A new leaf. A fresh start. But then I find myself at the party, thinking, Oh, yeah. This again.
So I stand on the edge of things, crossing my fingers, praying nobody will try to look me in the eye. And the good thing is, they usually don’t.”

“Watching people is a good hobby, but you have to be careful about it. You can’t let people catch you staring at them. If people catch you, they treat you like a first-class criminal. And maybe they’re right to do that. Maybe it should be a crime to try to see things about people they don’t want you to see.”

“You could try to believe what you wanted, but it never worked. Your brain and your heart decided what you were going to believe and that was that. Whether you liked it or not.”