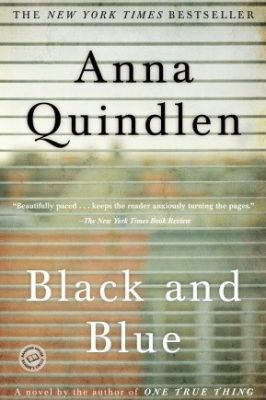 Black and Blue by Anna Quindlen
Published by Random House on April 1st 1998
Genre: Fiction
Format: Paperback
Pages: 320
Challenge Theme: A book with your favorite color in the title

Synopsis:
For eighteen years Fran Benedetto kept her secret, hid her bruises. She stayed with Bobby because she wanted her son to have a father, and because, in spite of everything, she loved him. Then one night, when she saw the look on her ten-year-old son’s face, Fran finally made a choice—and ran for both their lives.
Now she is starting over in a city far from home, far from Bobby. In this place she uses a name that isn’t hers, watches over her son, and tries to forget. For the woman who now calls herself Beth, every day is a chance to heal, to put together the pieces of her shattered self. And every day she waits for Bobby to catch up to her. Bobby always said he would never let her go, and despite the ingenuity of her escape, Fran Benedetto is certain of one thing: It is only a matter of time.

Review:
This book was a so so read for me. Not bad but not wonderful. At times I was absorbed by the story, other times it felt like it was dragging. I found myself thinking “this could have been left out” quite a bit. The whole time I was wondering how Bobby would find Fran because it was obvious from the start that was where the book would climax so perhaps that is why I felt a lot of the content made it feel dragged out. Without giving anything away I was NOT a fan of the ending. I will say anyone who has been in Fran’s shoes my heart goes out for. There need to be more resources out there for women (and some men) who find themselves in this same situation.

Favorite Quotes:
“Maybe when you were a kid you were so unsure of yourself that every school year was a time of reinvention; maybe only adults were stupid enough to think they knew exactly who they were.”

“Your children make it impossible to regret your past. They’re its finest fruits. Sometimes the only ones.”