Review: The Sacrifice of Sunshine Girl by Paige McKenzie 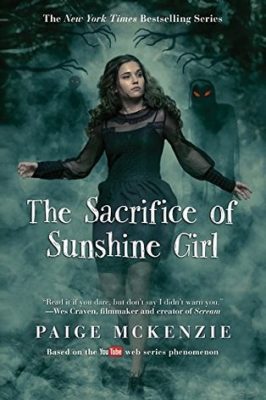 The Sacrifice of Sunshine Girl by Paige McKenzie
Series: The Haunting of Sunshine Girl, #3
Published by Hachette on April 4th 2017
Genre: Young Adult
Format: Hardcover
Pages: 322
Challenge Theme: Your favorite prompt from a past POPSUGAR reading challenge (The next book in a series you started)

Synopsis:
Sunshine Griffith can communicate with ghosts. Even more amazing—to herself; her boyfriend, Nolan; and her adoptive mom, Kat—she’s recently learned she’s a luiseach, one of an ancient race of creatures who have lived among humans for centuries, protecting them from dark spirits and helping them move on to the afterlife.

Having survived an abyss full of demons, Sunshine Griffith must figure out who—or what—has been organizing the forces of darkness against her. Do they want to destroy her and the rest of the endangered luiseach? Do they want to take over the world? Nolan has figured out that Sunshine’s death would trigger a calamitous event, so not only does she have to stay alive for herself, but for the fate of civilization. It’s not just the demons who want Sunshine dead, though. Her biological mother, Helena, is back. And what is Helena’s history with the mysterious man in black?

Fortunately for Sunshine, she has a lot of people (and ghosts) to help her stop the darkness: Nolan, her father and mentor Aidan, her mom Kat, Victoria, Lucio, Anna, and Ashley—whose handsome new crush, Sebastian, seems hauntingly familiar. But time may be running out as an unexpected event unleashes a fierce war between the luiseach and the demon army. In the midst of the fiery battle, Sunshine will learn a shocking truth about herself and what sort of sacrifice is required to save the world.

Review:
This was the final (as far as I know) book in the Sunshine Girl series and I think McKenzie wrapped it up nicely. Did this book blow me away, no, but it was enjoyable to read. This book had a good story line, a nice twist, and showed Sunshine coming into her full power. I loved that all the characters we have been introduced to in the previous books are present in this book and we get to know more about all of them. I don’t know how I feel about part of the ending that involves what happens to Sunshine after she battles the demon (don’t want to give it away) but I can see where it was a nice ending point.

Review: Without Merit by Colleen Hoover