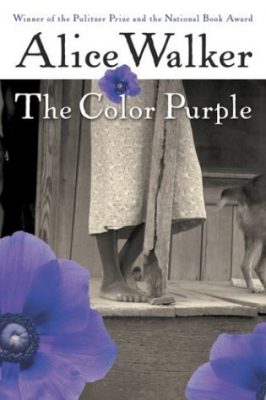 The Color Purple by Alice Walker
Published by Houghton Mifflin Harcourt on 1982
Genre: Fiction
Format: Hardcover
Pages: 288
Challenge Theme: A book that is also a stage play or musical

Synopsis:
Celie is a poor black woman whose letters tell the story of 20 years of her life, beginning at age 14 when she is being abused and raped by her father and attempting to protect her sister from the same fate, and continuing over the course of her marriage to “Mister,” a brutal man who terrorizes her. Celie eventually learns that her abusive husband has been keeping her sister’s letters from her and the rage she feels, combined with an example of love and independence provided by her close friend Shug, pushes her finally toward an awakening of her creative and loving self.

Review:
How I haven’t read this book yet I have no idea. I was probably supposed to read it in high school but I rarely read the books I had to back then. When I started it I thought I wasn’t going to like it, mainly because of how it was written. I was having a hard time understanding what we going on. Once I got used to the way Celie wrote I started to love it. My heart broke for Celie and all the horrible things she had to go through with all the men in her life. I am so glad when she finally was able to live her own life on her terms. I enjoyed all of the characters, even “Mister” but obviously only after he came to the realization of how he treated Celie. He ended up being a likeable person. Without giving too much away I really loved the ending. Now I want to watch the movie version of the book.

Favorite Quotes:
“I am an expression of the divine, just like a peach is, just like a fish is. I have a right to be this way…I can’t apologize for that, nor can I change it, nor do I want to… We will never have to be other than who we are in order to be successful…We realize that we are as ourselves unlimited and our experiences valid. It is for the rest of the world to recognize this, if they choose.”

“…have you ever found God in church? I never did. I just found a bunch of folks hoping for him to show. Any God I ever felt in church I brought in with me. And I think all the other folks did too. They come to church to share God, not find God.”

“Why any woman give a shit what people think is a mystery to me.”