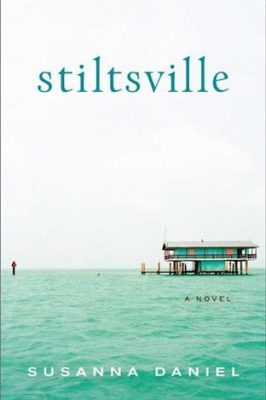 Synopsis:
One sunny morning in 1969, near the end of her first trip to Miami, 26-year-old Frances Ellerby finds herself in a place called Stiltsville, a community of houses built on pilings in the middle of Biscayne Bay.

It’s the first time the Atlanta native has been out on the open water, and she’s captivated. On the dock of a stilt house, with the dazzling skyline in the distance and the unknowable ocean beneath her, she meets the house’s owner, Dennis DuValand, and a new future reveals itself.

Turning away from her quiet, predictable life back home, Frances moves to Miami to be with Dennis. Over time, she earns the confidence of his wild-at-heart sister and wins the approval of his oldest friend. Frances and Dennis marry and have a child, but rather than growing complacent about their good fortune, they continue to face the challenges of intimacy and the complicated city they call home.

Stiltsville is the family’s island oasis – until suddenly it’s gone, and Frances is forced to figure out how to make her family work on dry land. Against a backdrop of lush tropical beauty, Frances and Dennis struggle with the mutability of love and Florida’s weather, as well as temptation, chaos, and disappointment. But just when Frances thinks she’s reached some semblance of higher ground, she must confront an obstacle so great that even the lessons she’s learned about navigating the uncharted waters of family life can’t keep them afloat.

Review:
This reading prompt was more difficult than I thought it would be. I am from South Florida, not a little town in the middle of the country. I would think there would be a ton of authors coming out of Miami/Fort Lauderdale….yeah not so much, at least not any whose books appealed to me. I finally settled on this book and it was a decent read. It was a nice love story between Frances & Dennis, written over the course of their marriage. Their ups and downs were relatable but it just kind of dragged along at parts. There were also times I was bothered by the writing. The author would be writing in the current time and then in the same chapter skip ahead YEARS at the end of the chapter. Then the next chapter would be back in chronological order. Usually I don’t mind the back and forth in time but in this instance it bothered me. I did enjoy the imagery of the stilthouse, I have lived in south Florida all my life and had no idea about these homes down south. Overall it was an OK read, not something I would tell people they HAVE to read. I don’t think I would have read it had it not been part of my reading challenge.

I did get invested towards the end probably because I related to Dennis’ diagnosis. My mother in law had ALS so I watched how my husband’s family handled that. It really is a horrible disease and unfortunately for my MIL it was very quick from diagnosis to when she passed away.