Review: The Awakening of Sunshine Girl by Paige McKenzie & Alyssa B. Sheinmel 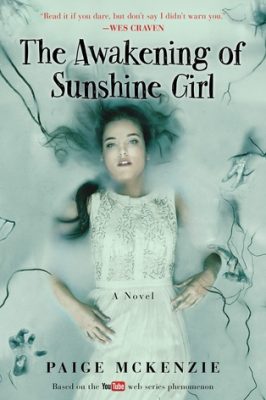 Synopsis:
Sunshine Griffith can communicate with ghosts. Even more amazing, she recently discovered—with the help of her would-be boyfriend, Nolan—that she’s a luiseach, one of an ancient race of creatures who have lived among humans for centuries, protecting them from dark spirits and helping them move on to the afterlife. Now, Sunshine’s powers are awakening and she feels spirits everywhere—intense and sometimes overwhelming.

Eager to get her supernatural abilities under control, Sunshine agrees to begin training with her mentor, her estranged father Aidan. He takes her to an abandoned compound deep in the Mexican jungle. But what she learns there about her powers, and her family history, turns out to be more terrifying than Sunshine could have imagined. Can anything—Aidan’s experiments, her friendship with another luiseach named Lucio, even Nolan’s research—prepare Sunshine to face the frightening woman who haunts her dreams, and to finally learn the truth about the rift that threatens the future of the luiseach and all of humankind?

The stakes grow ever higher in this sequel to The Haunting of Sunshine Girl, revealing that Sunshine has to protect more than her own friends and family—she may be the key to saving the entire human race.

Review:
This was the third book I read in two days on my cruise so I read 3 books in 6 days. I was pretty proud of myself. This is the second book in the Sunshine Girl series and I did enjoy this book better than the first. That is what I was hoping for. In this book I liked the story better than I did in the first. The story gets more in depth of the power that Sunshine has and we meet new, interesting characters. I also really liked how it ended because it made me really want to read the 3rd installment ASAP. It is already on my list for next year’s Popsugar reading challenge. The one part that I could have done without was the love triangle between Sunshine, Lucio, & Nolan. Sometimes it is ok for men and women to just be friends. Not everything has to be romantic. Clearly we know who she belongs with so it just felt pointless. Aside from that I can’t wait to see how Sunshine’s story wraps up in the next book.

Review: All Your Perfects by Colleen Hoover