Review: Still Me by Jojo Moyes 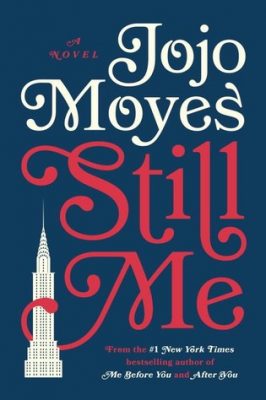 Still Me by Jojo Moyes
Series: Me Before You
Published by Pamela Dorman Books on January 30th 2018
Genre: Chick Lit
Format: Hardcover
Pages: 390
Challenge Theme: A book that’s published in 2018

Synopsis:
Louisa Clark arrives in New York ready to start a new life, confident that she can embrace this new adventure and keep her relationship with Ambulance Sam alive across several thousand miles. She steps into the world of the superrich, working for Leonard Gopnik and his much younger second wife, Agnes. Lou is determined to get the most out of the experience and throws herself into her new job and New York life.

As she begins to mix in New York high society, Lou meets Joshua Ryan, a man who brings with him a whisper of her past. Before long, Lou finds herself torn between Fifth Avenue where she works and the treasure-filled vintage clothing store where she actually feels at home. And when matters come to a head, she has to ask herself: Who is Louisa Clark? And how do you reconcile a heart that lives in two places?

Funny, romantic, and poignant, Still Me follows Lou as she navigates how to stay true to herself, while pushing to live boldly in her brave new world.

Review:
I am going to start by saying I am obsessed with the first book in this series, Me Before You especially the character of Louisa Clark so anything written in the series I will automatically love, probably not as much of course, but love nonetheless. I would read 3 more books in this series if Moyes wrote them. She has easily become one of my favorite authors. Did there need to be sequels to Me Before You, no but I am definitely glad that there are. I enjoyed this book better than the second book in the series and that is probably because in it Louisa is living out my own dream of living in NYC. The story isn’t going to blow you away but if you are a fan of Moyes’ work & the other books in this series I promise you will enjoy this. Without giving any spoilers, I will say parts of the story I found to be unnecessary to the plot and the ending was a little too predictable for me but I also get why Moyes wrote it that way. I would love to see where Louisa story goes next.

Favorite Quotes:
“I had a choice. I was Louisa Clark from New York or Louisa Clark from Stortfold. Or there might be a whole other Louisa I hadn’t yet met. The key was making sure that anyone you allowed to walk beside you didn’t get to decide which you were, and pin you down like a butterfly in a case. The key was to know that you could always somehow find a way to reinvent yourself again.”

“Know first who you are and then adore yourself accordingly.”

“I thought about how you’re shaped so much by the people who surround you, and how careful you have to be in choosing them for this exact reason, and then I thought, despite all that, in the end maybe you have to lose them all in order to truly find yourself.”

“I felt something rise inside me then, a feeling of joy and anticipation so great that it seemed as if this world had briefly stopped turning, like there was just me and the universe and a million good things that could happen if you only hung on in there.”

Review: Shrill Notes from a Loud Woman by Lindy West

Review: The Rescue by Nicholas Sparks