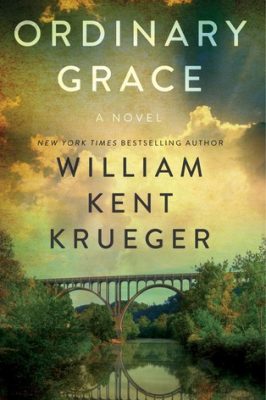 Ordinary Grace by William Kent Krueger
Published by Atria Books on March 26th 2013
Genre: Historical Fiction
Format: Paperback
Pages: 320
Challenge Theme: A book you borrowed or that was given to you as a gift

Synopsis:
New Bremen, Minnesota, 1961. The Twins were playing their debut season, ice-cold root beers were at the ready at Halderson’s Drug Store soda counter, and Hot Stuff comic books were a mainstay on every barbershop magazine rack. It was a time of innocence and hope for a country with a new, young president. But for thirteen-year-old Frank Drum it was a summer in which death assumed many forms.

When tragedy unexpectedly comes to call on his family, which includes his Methodist minister father, his passionate, artistic mother, Juilliard-bound older sister, and wise-beyond-his years kid brother, Frank finds himself thrust into an adult world full of secrets, lies, adultery, and betrayal.

On the surface, Ordinary Grace is the story of the murder of a beautiful young woman, a beloved daughter and sister. At heart, it’s the story of what that tragedy does to a boy, his family, and ultimately the fabric of the small town in which he lives. Told from Frank’s perspective forty years after that fateful summer, it is a moving account of a boy standing at the door of his young manhood, trying to understand a world that seems to be falling apart around him. It is an unforgettable novel about discovering the terrible price of wisdom and the enduring grace of God.

Review:
I borrowed this book from my mother because she was raving about it & it fit one of my challenge themes. I have to say I liked the book but it didn’t blow me away. The second half was really good but the first half went really slowly for me. It may be because I was still hung up on the book I read before. I feel bad for a book that comes after a book I fell in love with because it has a lot to live up to. I did enjoy the characters, the time period, and the story so I am definitely glad I read it. I also thought that William Kent Krueger wrote it beautifully.

I did figure out who killed Ariel pretty early on and thought it was pretty obvious so not sure how the family didn’t figure it out sooner. I don’t love when I figure out the “twist” early on but I still enjoyed reading how they came to the discovery of it and what the consequences of that were. I loved how it was ended.

Favorite Quotes:
“The dead are never far from us. They’re in our hearts and on our minds and in the end all that separates us from them is a single breath, one final puff of air.”

“The miracle is this: that you will rise in the morning and be able to see again the startling beauty of the day.”

“Loss, once it’s become a certainty, is like a rock you hold in your hand. It has weight and dimension and texture. It’s solid and can be assessed and dealt with. You can use it to beat yourself or you can throw it away.”
“That was it. That was all of it. A grace so ordinary there was no reason at all to remember it. Yet I have never across the forty years since it was spoken forgotten a single word.”
0 comment
0
FacebookTwitterPinterestEmail