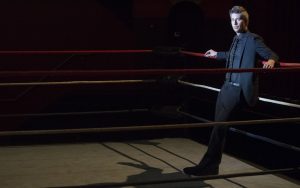 Well here we are, episode 3 of a pretty boring season, at least as far as Arie is concerned. The thing saving the season is the ladies, thanks goodness. Let’s jump right in shall we? 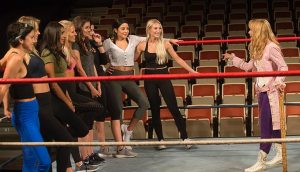 First off, Arie coming out with the bandit mask….no. Second, calling the wrestling match GLOB (Gorgeous Ladies of the Bachelor)….again no. Third, these old ladies from the 80s show Glow….hell no. Not sure if this was meant to be fun but those ladies were just rude. I understand it is part of their wrestling persona but come on…this is a Bachelor date. You aren’t having your second chance in the spotlight ladies. Oh BTW Bekah definitely thought these ladies were from the Netflix show Glow because there is no way she knows who the hell these ladies are. Her parents were probably children in the 80s.

Moving on…after the ladies practice some moves they go get ready for their matches and become their characters. Bekah is of course Sex Kitten, Krystal is The Cougar, Mariyk is The Golddigger, Bibiana is Bridezilla (and has the worst costume by far), Tia is The Southern Bell, and Maquel is The Lunch Lady (I take that back SHE has the worst costume.) I have no idea who Jacqueline & Lauren B are, clearly they aren’t interesting enough to get screen time. We start the event with Arie wrestling Kenny “Pretty Boy Pitbull” King from Rachel’s season. Of course Kenny roughs him up a bit but because Arie is the focus of the season he “wins” the match against Kenny while all the girls gush. Excuse me while I go puke. 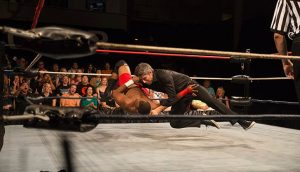 Here is the breakdown of the ladies’ matches, if it even matters,….Maquel beats Bekah, Krystal beats Jacqueline, Tia beats Bibiana, and I have no idea who won the match between Mariyk & Lauren B because they pretty much spent the entire time stroking each other. I mean what are they doing??: 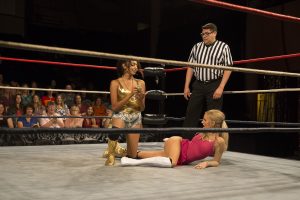 After probably one of the worse date up until now Arie takes the ladies to an Airstream park and of course Krystal is the first to steal him away. I am really over the little whispery voice she does around him. Girl bye. Next up is Lauren B and again she must not be good for TV because they show none of her time with Arie. Bibiana uses her time wisely….bitching about Krystal. Tia has some time and they do some kissing. I have to say the way he is ALWAYS touching the ladies’ hair and faces when he kisses is really starting to get to me and not in a good way. During the date Bekah becomes a front runner for me. They seem to have a great connection. Always easy conversation and they are always making out…and we get the first lap straddle of the season. I have to say the more and more I watch Krystal the more I want her to GTFO. She is so condescending and fake to all these other women. I can’t believe I liked her at first! Date rose goes to…Bekah, her straddling move worked. 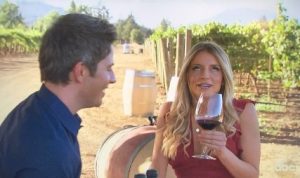 This was such a bad date that the picture above was literally the ONLY picture/gif that I could find online today. To put it in perspective I have about 10 pictures from each group date to choose from. This may be the shortest recap of a date I have ever done. Arie & Lauren take a private jet to Napa Valley, drink some wine, have some pointless conversation about what time they go to bed AND what time they get up, and Arie actually EATS DINNER. I have never seen anyone eat during these dates but Lauren was talking so much (about things like her mom’s eye infection) that he has nothing better to do than eat. I have never heard someone be all over the place as bad as she was. The plus was she realized she was a hot mess but too little too late because she does not get the rose. Back at the house they come to get her luggage and Caroline proceeds to cry and Krystal tries to make it ALL ABOUT HERSELF. My favorite thing is when Caroline  says that Krystal needs to stop being so condescending just because she met his dog. Cue the next group date…. 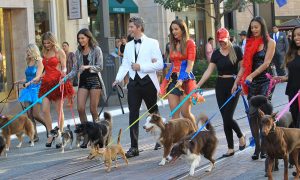 This is a date involving playing with dogs which is pretty much the best thing that could happen in life. Arie brings along his dog so now Krystal isn’t so special. Each lady gets a dog and they are going to be performing with the pooches later in the day. Of course Annaliese has yet another issue, this time it is doggy trauma so we are given another beautiful re-enactment of Annaliese’s childhood. Apparently she has multiple past issues with dogs but the one she focuses on when she was at her grandparents house and their dog bit her and she almost lost an eye. Too bad she is definitely going home because I would love to see what traumatic memories her next group date would have brought out. After some practice everyone goes to The Grove to perform, very badly, for a crowd of kids. The highlight of the event is Chris Harrison and Fred Willard commentating. Otherwise this is yet another snoozefest. 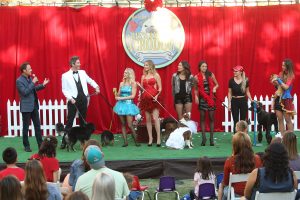 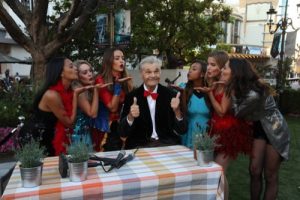 During the date cocktail party Chelsea & Arie further their connection, she tells him about how this date reminded her of her home-life. How she misses her son but knows she is there for an important reason. I’ll say I like her more than I did the first night but that might just be because Krystal has come out to be the bigger villain. Caroline asks him what he has done since the 5 years since Emily dumped him and lets him know his nickname with the ladies is “pillow lips”…gag. Then Annaliese gets her time and it hurts to watch. She has nothing at all to say to him. They have ZERO connection. He then makes out with Becca a little and who knows about the other ladies because they don’t show his time with them. Date rose goes to…Chelsea.

Tune in next week to find out how old Becca actually is! Online I have read she is 23 but my guess is 20.

Review: The Hate U Give by Angie Thomas