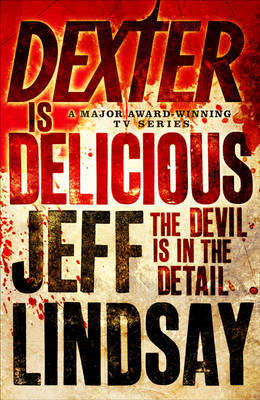 Synopsis:
Dexter Morgan’s happy homicidal life is undergoing some major changes. He’s always live by a single golden rule – he kills only people who deserve it. But the Miami blood-spatter analyst has recently become a daddy – to an eight-pound curiosity named Lily Anne – and strangely, Dex’s dark urges seem to have left him. Is he ready to become an overprotective father? To pick up soft teddy bears instead of his trusty knife, duct tape, and fishing wire? What’s a serial killer to do?

Then Dexter is summoned to investigate the disappearance of an eighteen-year-old girl who seems to have been abducted by a bizarre group…who just may be vampires…and – possibly – cannibals. Nothing like the familiar hum of his day job to get Dexter’s creative dark juices flowing again. Assisting his bull-in-a-china-shop detective sister, Deborah, Dex wades into an investigation that gets more disturbing by the moment. And to compound the complication of Dexter’s ever-more-complicated life, a person from his past suddenly reappears…moving dangerously close to his home turf and threatening to destroy the one thing tat has maintained Dexter’s pretend human cover and kept him out of the electric chair: his new family.

From an uncharacteristically racy encounter in the Florida Everglades to the most bizarre fringe nightclub in the anything-goes Miami scene, Dexter Is Delicious is an ingenious journey through the dark recesses of Dexter’s lovably cold soul.

Review:
So this Dexter novel was definitely better than the last two but still didn’t blow me away. I did like the main story about the vampires and cannibalism. It was the first time the book felt like it focused on the police case more so then on Dexter. While I did enjoy more details about that I didn’t like the reason why. Dexter has a baby and all of a sudden he is no longer a killer? That is the dumbest thing ever. I mean I read that and was seriously annoyed. So much so that I thought I would hate the book. Luckily the other story was good enough to keep my interest and the end had me back on board as far as Dexter goes. I am still baffled as to why the books and show are SO extremely different aside from the first book. Not sure why Lindsay would be ok with the television producers taking that much liberty with his work. If I didn’t have this thing with finishing book series I probably would have stopped after book 3 but I am going to see it through until the end. Since the books are so different from the show I am actual curious with how Lindsay will end the series.

Favorite Quotes:
“Have you noticed how difficult it is just to get along in the world? If you’re no good at all in your job, people treat you badly and eventually you will be unemployed. And if you’re a little better than competent, everyone expects miracles from you, every single time. Like most of life, it’s a no-win situation. And if you dare to mention it, no matter how creatively you phrase your complaints, you are shunned as a whiner.”

“They like to tell us that it is important to speak the truth, but it has been my experience that real happiness lies in having people tell you what you want to believe, usually not the same thing at all, and if you have to stub your toe on the truth later, so be it.”

Review: The Hate U Give by Angie Thomas