Home Reading Review: Talking as Fast as I Can by Lauren Graham

Review: Talking as Fast as I Can by Lauren Graham 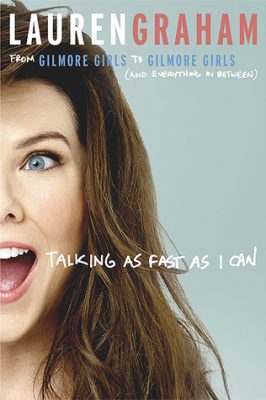 Talking as Fast as I Can: From Gilmore Girls to Gilmore Girls, and Everything in Between by Lauren Graham
Published by Ballantine Books on November 29th 2016
Genre: Nonfiction-Memoir
Format: Hardcover
Pages: 209

Synopsis:
In this collection of personal essays, the beloved star of Gilmore Girls and Parenthood reveals stories about life, love, and working as a woman in Hollywood—along with behind-the-scenes dispatches from the set of the new Gilmore Girls, where she plays the fast-talking Lorelai Gilmore once again.

In Talking as Fast as I Can, Lauren Graham hits pause for a moment and looks back on her life, sharing laugh-out-loud stories about growing up, starting out as an actress, and, years later, sitting in her trailer on the Parenthood set and asking herself, “Did you, um, make it?” She opens up about the challenges of being single in Hollywood (“Strangers were worried about me; that’s how long I was single!”), the time she was asked to audition her butt for a role, and her experience being a judge on Project Runway (“It’s like I had a fashion-induced blackout”).

Some more things you will learn about Lauren: She once tried to go vegan just to bond with Ellen DeGeneres, she’s aware that meeting guys at awards shows has its pitfalls (“If you’re meeting someone for the first time after three hours of hair, makeup, and styling, you’ve already set the bar too high”), and she’s a card-carrying REI shopper (“My bungee cords now earn points!”).

Including photos and excerpts from the diary Graham kept during the filming of the recent Gilmore Girls: A Year in the Life, this book is like a cozy night in, catching up with your best friend, laughing and swapping stories, and—of course—talking as fast as you can.

Review:
I read Lauren Graham’s fiction novel, Someday Someday Maybe, and I didn’t really like it but I love memoirs and I love Lauren Graham so when I found out she wrote this book I really wanted to read it. I am glad I did because I really enjoyed it! I am not really a fan of audio books but I think this would be even better in audio form. I think Lauren reading her book would make it that much more enjoyable. I love her stories and found myself chuckling often. It also made me want to go back and watch both Gilmore Girls & Parenthood. Like I need more TV to watch! I am hoping like the Gilmore Girls reboot there is a sequel to this book. Great read!

Favorite Quotes:
“Life doesn’t often spell things out for you or give you what you want exactly when you want it, otherwise it wouldn’t be called life, it would be called vending machine.”

“As my friend Oliver Platt used to say to me about hopes and dreams I’d share with him: ‘It’s coming, just not on your time frame.”

“I guess what I’m saying is, let’s keep lifting each other up. It’s not lost on me that two of the biggest opportunities I’ve had to break into the next level were given to me by successful women in positions of power. If I’m ever in that position and you ask me, “Who?” I’ll do my best to say, “You” too. But in order to get there, you may have to break down the walls of whatever it is that’s holding you back first. Ignore the doubt—it’s not your friend—and just keep going, keep going, keep going.”

“I still find that, in general, having a plan is, well, a good plan. But when my carefully laid plan laughed at me, rather than clutch at it too tightly I just made a new one, even if it was one that didn’t immediately make sense. In blindly trying a different path, I accidentally found one that worked better. So don’t let your plan have the last laugh, but laugh last when your plan laughs, and when your plan has the last laugh, laugh back, laughing!”

“Sometimes the idea of doing something is the most fun part, and after you go through with it, you feel deflated because you realize you’re back to looking for the next thrill.”

Each possess changing black and red slots designated with amounts but there is
a variation in the quantity of inexperienced pouches on each wheel.