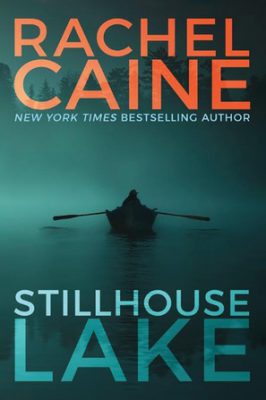 Synopsis:
Gina Royal is the definition of average—a shy Midwestern housewife with a happy marriage and two adorable children. But when a car accident reveals her husband’s secret life as a serial killer, she must remake herself as Gwen Proctor—the ultimate warrior mom.

With her ex now in prison, Gwen has finally found refuge in a new home on remote Stillhouse Lake. Though still the target of stalkers and Internet trolls who think she had something to do with her husband’s crimes, Gwen dares to think her kids can finally grow up in peace.

But just when she’s starting to feel at ease in her new identity, a body turns up in the lake—and threatening letters start arriving from an all-too-familiar address. Gwen Proctor must keep friends close and enemies at bay to avoid being exposed—or watch her kids fall victim to a killer who takes pleasure in tormenting her. One thing is certain: she’s learned how to fight evil. And she’ll never stop.

Review:
We all know I like a good thriller and this book did not disappoint. It had all the things I need in a thriller…had my attention from the first chapter, I didn’t want to put it down, a great amount of suspense, never lost my attention, and I changed my mind a million times about who the accomplice was. Bravo Rachel Caine, bravo! I don’t want to give anything away so this review will be short and sweet. I see some people complaining about the cliffhanger at the end but I loved it! I already have the next book in queue at my library. It just came out today so I may have to buy it. Not sure I want to wait for the library to get it in. I have to know what happens next!

Favorite Quotes:
“Guns don’t keep anyone safe. They only equal the playing field.”

“Normal life. Comfortable life. Not perfect, of course. Nobody had a perfect marriage, did they?”

“Everybody gets mean stuff on the Internet, Mom. You shouldn’t take it so seriously. Just ignore them. They’ll go away.” That, I think, is a maddening thing to say on so many levels. As if the Internet is a fantasy world, inhabited by imaginary people. As if we’re ordinary people in the first place. And most of all, it’s such a young male thing to say, this automatic assumption of safety. Women, even girls of Lanny’s age, don’t think that way. Parents don’t. Older people don’t. It reveals a certain blind, entitled ignorance to how dangerous the world really is.”

“He also knows that a gun can’t protect you unless you protect yourself mentally, emotionally, and logically. It’s the punctuation at the end, not the paragraph.”

Review: Talking as Fast as I Can by Lauren Graham