Home Reading Review: It Ends with Us by Colleen Hoover 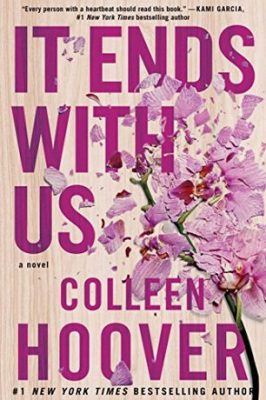 It Ends with Us by Colleen Hoover
Published by Atria Books on August 2nd 2016
Genre: Fiction
Format: Paperback
Pages: 376

Synopsis:
Sometimes it is the one who loves you who hurts you the most.

Lily hasn’t always had it easy, but that’s never stopped her from working hard for the life she wants. She’s come a long way from the small town in Maine where she grew up—she graduated from college, moved to Boston, and started her own business. So when she feels a spark with a gorgeous neurosurgeon named Ryle Kincaid, everything in Lily’s life suddenly seems almost too good to be true.

Ryle is assertive, stubborn, maybe even a little arrogant. He’s also sensitive, brilliant, and has a total soft spot for Lily. And the way he looks in scrubs certainly doesn’t hurt. Lily can’t get him out of her head. But Ryle’s complete aversion to relationships is disturbing. Even as Lily finds herself becoming the exception to his “no dating” rule, she can’t help but wonder what made him that way in the first place.

As questions about her new relationship overwhelm her, so do thoughts of Atlas Corrigan—her first love and a link to the past she left behind. He was her kindred spirit, her protector. When Atlas suddenly reappears, everything Lily has built with Ryle is threatened.

Review:
If you can’t tell by the number of quotes I have included in this review I absolutely LOVED this book. I probably could have kept adding quotes that spoke to me but I didn’t want to get too out of hand. This book made me feel every single emotion possible. At times I was happy, at times I was sad, at times I was angry. I cried, I smiled, I wanted to scream. The synopsis doesn’t give too much away so I don’t want to either. The subject matter of this book is so important for everyone to read. You just FEEL for these characters, every single one of them…even the ones you don’t want to feel for. I will warn you there are parts of this book that are a bit disturbing in nature but nonetheless important to have a conversation about. I can’t wait until someone I know reads this book so I can have someone to discuss it with. Trust me you need to read this book! You will not want to put it down nor will you want it to end.

Favorite Quotes:
“There is no such thing as bad people. We’re all just people who sometimes do bad things.”

“All humans make mistakes. What determines a person’s character aren’t the mistakes we make. It’s how we take those mistakes and turn them into lessons rather than excuses.”

“Just because someone hurts you doesn’t mean you can simply stop loving them. It’s not a person’s actions that hurt the most. It’s the love. If there was no love attached to the action, the pain would be a little easier to bear.”

“Life is a funny thing. We only get so many years to live it, so we have to do everything we can to make sure those years are as full as they can be. We shouldn’t waste time on things that might happen someday, or maybe even never.”

“I feel like everyone fakes who they really are, when deep down we’re all equal amounts of screwed up. Some of us are just better at hiding it than others.”

“No one is exclusively bad, nor is anyone exclusively good. Some are just forced to work harder at suppressing the bad.”

“I think that’s one of the biggest signs a person has matured—knowing how to appreciate things that matter to others, even if they don’t matter very much to you.”

“You’re only human. And as humans, we can’t expect to shoulder all of our pain. Sometimes we have to share it with the people who love us so we don’t come crashing down from the weight of it all”

“Sometimes even grown women need their mother’s comfort so we can just take a break from having to be strong all the time.”

“Preventing your heart from forgiving someone you love is actually a hell of a lot harder than simply forgiving them.”

“Imagine all the people you meet in your life. There are so many. They come in like waves, trickling in and out with the tide. Some waves are much bigger and make more of an impact than others. Sometimes the waves bring with them things from deep in the bottom of the sea and they leave those things tossed onto the shore. Imprints against the grains of sand that prove the waves had once been there, long after the tide recedes.”

“Maybe love isn’t something that comes full circle. It just ebbs and flows, in and out, just like the people in our lives. Just because we didn’t end up on the same wave, doesn’t mean we aren’t apart of the same ocean.”

I got what you intend, thankyou for putting up.Woh I am delighted to find this website through google.

[…]Every when in a although we opt for blogs that we read. Listed below would be the most recent websites that we choose […]

[…]check beneath, are some absolutely unrelated web sites to ours, however, they may be most trustworthy sources that we use[…]

[…]we came across a cool web site that you might take pleasure in. Take a look in the event you want[…]

[…]Wonderful story, reckoned we could combine several unrelated data, nevertheless definitely worth taking a look, whoa did 1 discover about Mid East has got much more problerms at the same time […]

[…]Wonderful story, reckoned we could combine a handful of unrelated data, nevertheless seriously really worth taking a look, whoa did a single study about Mid East has got much more problerms too […]

[…]just beneath, are a lot of entirely not related web-sites to ours, on the other hand, they are surely really worth going over[…]

[…]usually posts some really intriguing stuff like this. If you are new to this site[…]

[…]Wonderful story, reckoned we could combine a few unrelated data, nevertheless definitely worth taking a look, whoa did 1 master about Mid East has got much more problerms at the same time […]

[…]we like to honor lots of other internet sites around the web, even when they arent linked to us, by linking to them. Under are some webpages really worth checking out[…]

[…]Wonderful story, reckoned we could combine a handful of unrelated data, nonetheless truly really worth taking a search, whoa did 1 master about Mid East has got far more problerms too […]

[…]check beneath, are some entirely unrelated internet websites to ours, having said that, they may be most trustworthy sources that we use[…]

[…]very couple of sites that transpire to become in depth below, from our point of view are undoubtedly well really worth checking out[…]

[…]please stop by the web-sites we follow, like this one particular, as it represents our picks from the web[…]

[…]that would be the finish of this article. Here youll find some sites that we consider you will appreciate, just click the hyperlinks over[…]

[…]check beneath, are some absolutely unrelated websites to ours, even so, they’re most trustworthy sources that we use[…]

[…]although internet sites we backlink to beneath are considerably not related to ours, we really feel they’re essentially worth a go via, so possess a look[…]

Neurology 2008a; 71 11 841 7 <a href=[Link deleted]80 mg This is because the muscle mass gained from Anadrol is water, and it can be quite difficult to maintain this type of lean weight for an extended period of time

[…]just beneath, are several entirely not connected internet sites to ours, even so, they may be certainly really worth going over[…]

[…]usually posts some extremely fascinating stuff like this. If you are new to this site[…]

[…]one of our visitors recently advised the following website[…]

[…]Every once in a whilst we choose blogs that we study. Listed beneath would be the newest internet sites that we select […]

[…]please take a look at the web-sites we comply with, including this 1, as it represents our picks through the web[…]

[…]just beneath, are several completely not associated internet sites to ours, having said that, they’re surely worth going over[…]

[…]we came across a cool internet site that you just may possibly appreciate. Take a appear should you want[…]

[…]that is the end of this report. Here youll obtain some web pages that we consider youll value, just click the hyperlinks over[…]

[…]usually posts some incredibly interesting stuff like this. If you are new to this site[…]

[…]please go to the websites we comply with, including this a single, as it represents our picks through the web[…]

[…]we prefer to honor numerous other internet websites around the net, even though they arent linked to us, by linking to them. Below are some webpages worth checking out[…]

[…]usually posts some really interesting stuff like this. If youre new to this site[…]

[…]one of our guests not long ago encouraged the following website[…]