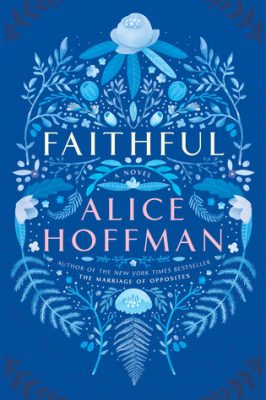 Synopsis:
Growing up on Long Island, Shelby Richmond is an ordinary girl until one night an extraordinary tragedy changes her fate. Her best friend’s future is destroyed in an accident, while Shelby walks away with the burden of guilt.

What happens when a life is turned inside out? When love is something so distant it may as well be a star in the sky? Faithful is the story of a survivor, filled with emotion—from dark suffering to true happiness—a moving portrait of a young woman finding her way in the modern world. A fan of Chinese food, dogs, bookstores, and men she should stay away from, Shelby has to fight her way back to her own future. In New York City she finds a circle of lost and found souls—including an angel who’s been watching over her ever since that fateful icy night.

Here is a character you will fall in love with, so believable and real and endearing, that she captures both the ache of loneliness and the joy of finding yourself at last. For anyone who’s ever been a hurt teenager, for every mother of a daughter who has lost her way, Faithful is a roadmap.

Review:
This book wasn’t even on my TBR list…it was an impulse check out at the library. I went there to pick up some books I had on hold and I saw a shelf called “Express Books” so I decided to check it out. Between the cover and the synopsis this jumped out at me. I am so glad I picked it up. It is such a good story about what happens when you are the one who survives and have to live on with the guilt of that. I couldn’t imagine how I would manage with that same fate. Shelby doesn’t always handle it well, and some people may dislike her at first, but as the book continues she starts to get a hold of her life. It is a great journey to go on with her. I love the little details that are mentioned again and again throughout the book….the postcards, the fortune cookies, the dogs; especially the postcards:

I have to say throughout most of the book I wanted Shelby to find her way back to Ben but once James came into the picture I was happy that he is who she ended up with. She got to meet her angel and fall in love with the person who not only saved her life but helped her move on from the tragedy. I really believe that if it weren’t for those postcards she would have never been able to move on and make her life worthwhile.

Favorite Quotes:
“You rescue something and you’re responsible for it. But maybe that’s what love is. Maybe it’s like a hit-and-run accident; it smashes you before you can think. You do it no matter the cost and you keep on running.”

“People say if you face your worst fear, the rest is easy, but those are people who are afraid of rattlesnakes or enclosed spaces, not of themselves and the horrible things they’ve done.”

“Everyone should know exactly what everyone else is thinking and then people wouldn’t hurt each other so much.”

“She thinks of the way angels arrive, when you lease expect them, when the road is dark, when you’re bleeding and alone and hopeless, when you’re sleeping in a basement, convinced that no one knows you’re there.”

“She has an eye for tragedy and sorrow. Show her a rose and she’ll see only the wasp in the center of the bloom.”

I came to this site with the introduction of a friend around me and I was very impressed when I found your writing. I’ll come back often after bookmarking! baccaratsite