Home Television ‘Bachelor in Paradise’ Episode 1 Recap: Let’s Get it On!

‘Bachelor in Paradise’ Episode 1 Recap: Let’s Get it On! 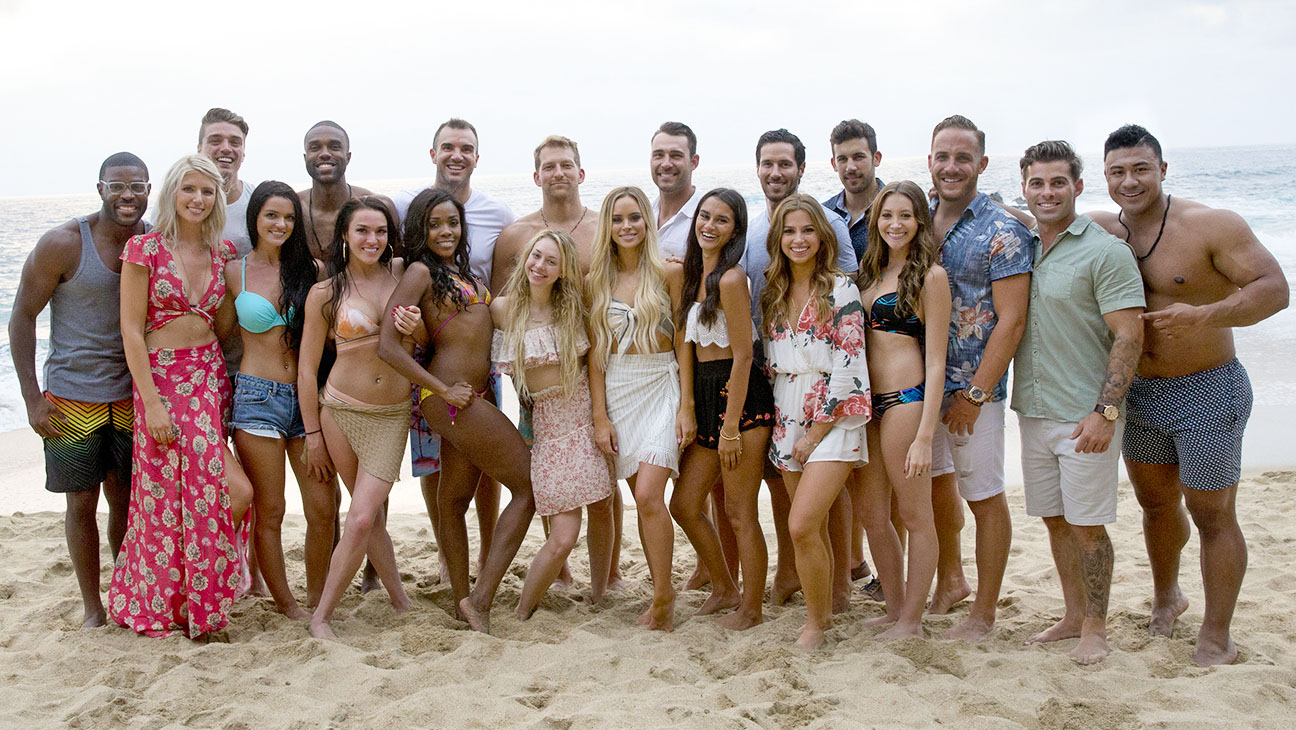 Well folks it is time for my favorite show in the Bachelor franchise….’Bachelor in Paradise!!’ I was so worried that my summer was going to be ruined because of DeMario & Corinne but alas the craziness is back on! Not only is it back on but we get TWO episodes this week, wooohooo! Here is everyone who arrived on the first episode:

The first two to arrive are Dean & Raven followed by Kristina, Danielle & Ben Z. Of course Dean is a hot commodity for the ladies. Both Kristina & Danielle have their sights set on him while Ben has his on Raven. Unfortunately all Ben wants to talk about is his dog that he left back home. Throughout the rest of this episode he seriously talks about his dog every time he is on screen. It is a bit much, ok it is a lot much! Next up with have Iggy, who may be more excited to see Dean than any of the ladies.

Up next we have Jasmine, who is most excited to meet the guys from Rachel’s season, Jack “I’m not a serial killer” Stone, and Alexis in her Shark/Dolphin costume. Waiting for more people to arrive the girls start talking about how DeMario is a douche and he better not be on this season…annnnnnd cue DeMario! He tells Chris that while he didn’t have a girlfriend when he went on the Bachelorette, he did lead her on and that was wrong. When he gets up to the group Raven just straight up asks if he has a girlfriend this time and says she went to bat for him with Rachel and he beyond disappointed her. Side note whoever gave him a whistle, I strongly dislike you. Next up we have Derek, Alex, and my least favorite Bach contestant ever…Corinne. We already know that Corinne & DeMario start their “relationship” right away so we will skip over all that, just like the producers are. Dean pulls Kristina aside to chat about their difficult childhoods and bond over that. I am calling them as a couple right now. I love them together! 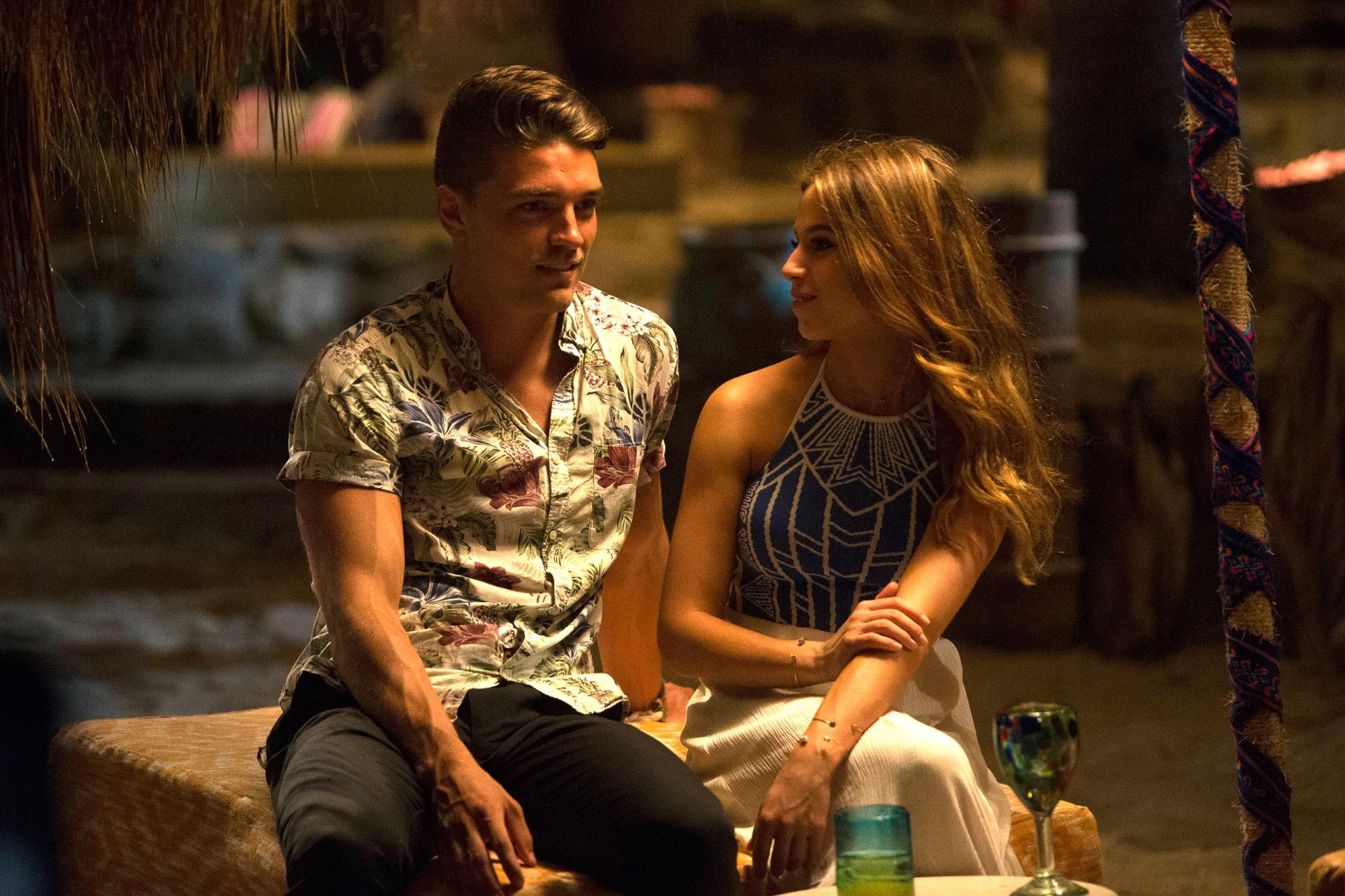 Next to arrive we have Lacey, Vinny, Diggy, Matt (with his penguin suit), Nick (with his Santa beard), and Amanda. Amanda brings back her engagement ring from last season to give to Chris and says she ignored some red flags last season (ya think!) and that Josh is a very sweaty person. Well ok then. Last to arrive (for now) is Taylor. Here are a few quick things that happen: Nick says he is there for Jasmine and kisses her after everyone prompts him to; Taylor tells Derek that she needs a man who can build a fire in the woods; Alexis’ vagina isn’t feeling anybody yet; Jorge is leaving paradise to follow his dreams and Wells will be the new bartender; This week the ladies will be the one in control. First date card comes and it is for Kristina..she picks Dean because duh! Their date consists of dinner, flamenco dancers, and kissing under a confetti filled sky. Back at the beach Iggy & Lacey are hitting it off and Nick is too drunk so Jasmine moves onto Matt. The next morning Lacey tells Iggy that her grandfather passed away and that she needs to leave but plans on coming back. She hopes that there is still a chance for love when she returns. Then another bachelor arrives…Robby and his hair. Side note: What is a social media influencer? He brings with him a date card and he asks Raven to go on the date with him. Ben is not happy about it. I mean he left his dog to go on this show people! 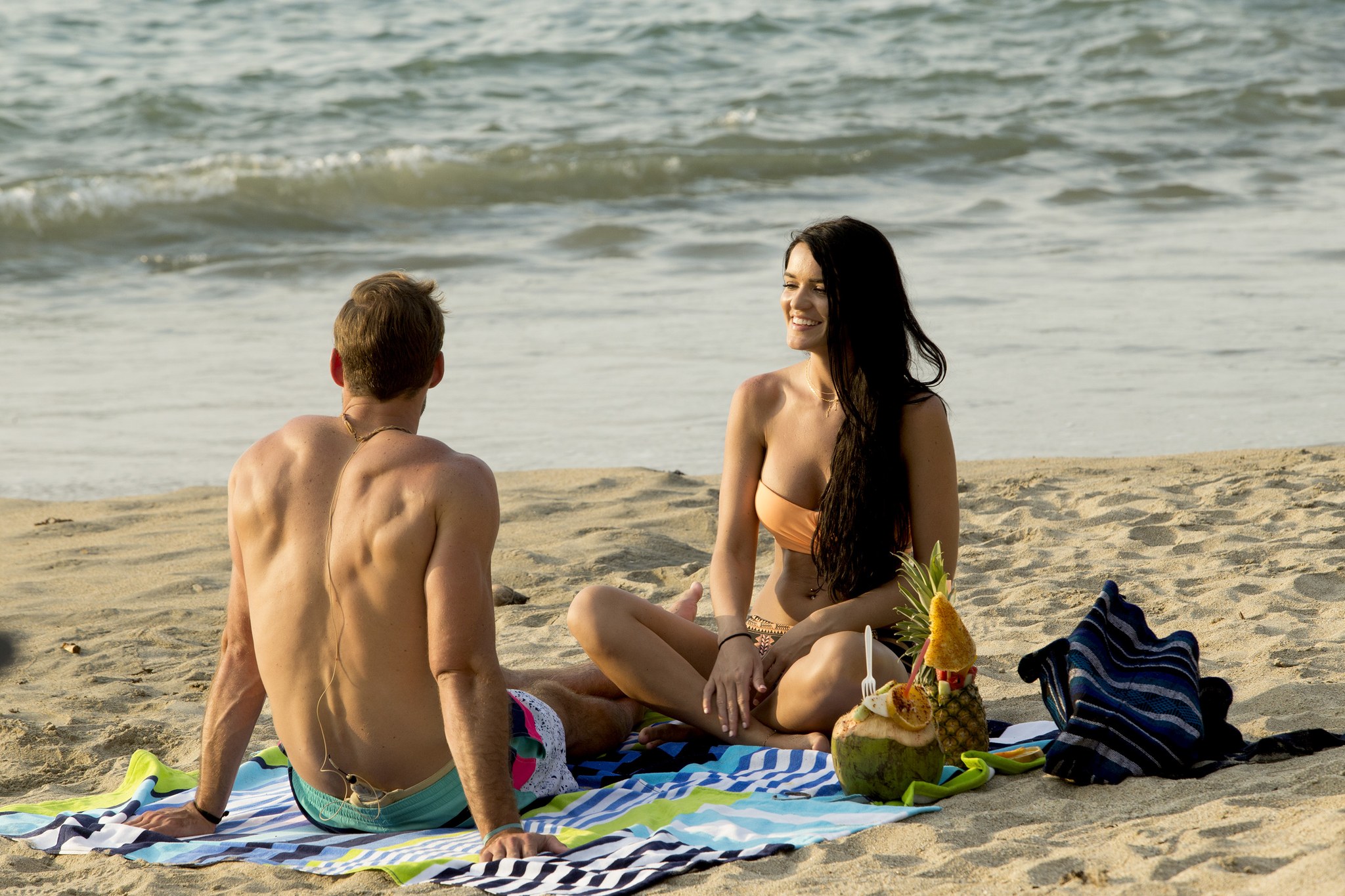 They go jet skiing and chat on the beach. I don’t remember Robby being so unlikeable during JoJo’s season but I am not feeling him right now. Like Raven said you can’t trust someone who has such nice abs. She cracks me up! Robby comes back from the date really feeling Raven but Raven is not feeling the same. She says there was just no spark. Good news for Ben. Next date card goes to Matt who picks Jasmine to take. They go to a drag show, where of course they drag Matt up to make him over. I have to say I think he looked great as a drag queen. If he shaved his face he could totally pull it off! Now it is time for everyone to get ready for the rose ceremony. For sure couples seems to be Dean & Kristina and Taylor & Derek. Jack & Danielle seems to be hitting it off, along with Raven & Ben (who is a better kisser than Robby apparently), and Jasmine & Matt. Everyone else’s fate seems to be up in the air but before we can get to the rose ceremony producers ask to see DeMario & Corinne and then all the crew is instructed to stop filming. Everyone is of course wondering what the heck is going on but we all know of course. 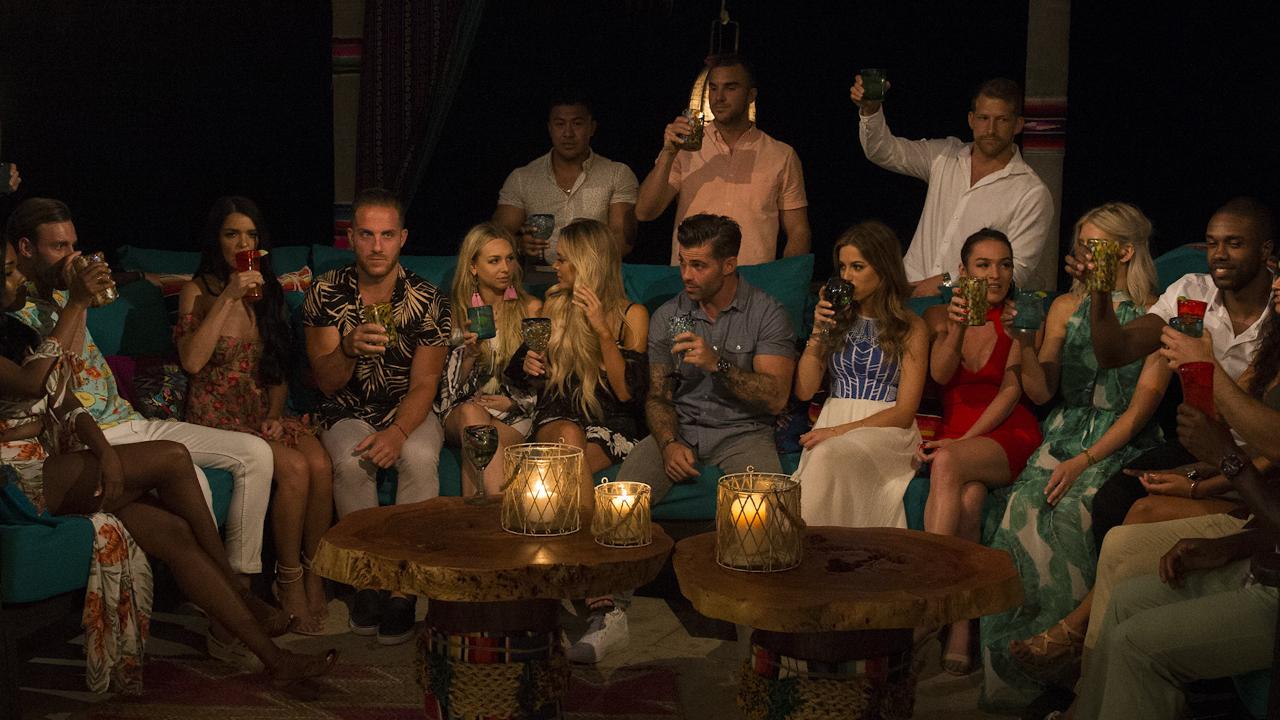 Tune in tomorrow to see the aftermath of the DeMario/Corinne drama and to see Carly & Evan’s paradise wedding. Also who is going home and what ladies & gents will be showing up next? Ahhh I love this ridiculous show!

You can watch ‘Bachelor in Paradise’ Mondays at 8 pm on ABC.

‘Bachelor in Paradise’ Episode 2 Recap: We’re Back On!

http://prednisonebuyon.com/ – where to buy prednisone for dogs without prescrition

Citalopram Purchase With A Mastercard

Citalopram Purchase With A Mastercard

how to buy generic cialis online shopping for cialis

does plaquenil cause hair loss

How To Order Nympho Max Drugs

PokerStars, 888poker, WSOP App, and ClubGG Poker are the most popular poker rooms to offer a service like this one and by far the best ones to play poker with friends. Unfortunately, online poker isn’t considered to be a specifically legal operation within the state. ThatвЂ™s not to say that it is illegal, but the UIGEA is still in effect across the US, which does put restrictions on what California is able to do as far as online poker is concerned. Tribal casinos are their own entity, and even though people from the state have been trying to get laws passed through to establish legal online poker, a lot of backlash has come from the tribal communities. In February 2013, Nevada became the second state to pass online gambling legislation, authorizing the issue of online poker licenses. A week later, New Jersey became the third state to legalize online gambling and made plans to issue licenses for online poker and online casino sites. https://www.digital-pinball.com/community/profile/ivykrug79403736/ Unlike in a real casino, there is no way to win money back or earn a payout on coins. Playing on a real money Texas hold’em app in the US is not as easy as we would all like it to be. Poker game apps like WSOP Poker, Zynga Poker, and Governor of Poker are everywhere вЂ” but you can’t play to win real money on them. Yes, many online casinos offer free roulette game play for those who wish to test the waters, try out the games software, learn the rules, and play for fun without risk. Once you get comfortable with the game you can always join the site and play for real money, and real winnings. Historically, Apple’s App Store and the Google Play Store were not receptive to gambling titles that allowed users to place actual wagers. Recently, however, various real money casino apps have begun to appear in both of the app stores. This may be partly due to the fact that companies could see how the rise of HTML5 and responsive technology would enable would-be players to bypass their app stores and gamble regardless.

[url=http://buycialis40mgprice.quest/]cialis for daily use for sale[/url]

[url=http://buybestviagratabs.quest/]price of viagra in india[/url]

viagra vs cialis which is better tadalafil bph

[url=https://cheapviagratabletsnoprescription.quest/]where to get viagra tablets[/url]

[url=https://ivermectinch.monster/]how much does ivermectin cost[/url]

can i buy cialis in malaysia cialis for women dosage