Home Television ‘The Bachelorette’ Episode 9 Recap: Is This Goodbye for Peter???

‘The Bachelorette’ Episode 9 Recap: Is This Goodbye for Peter??? 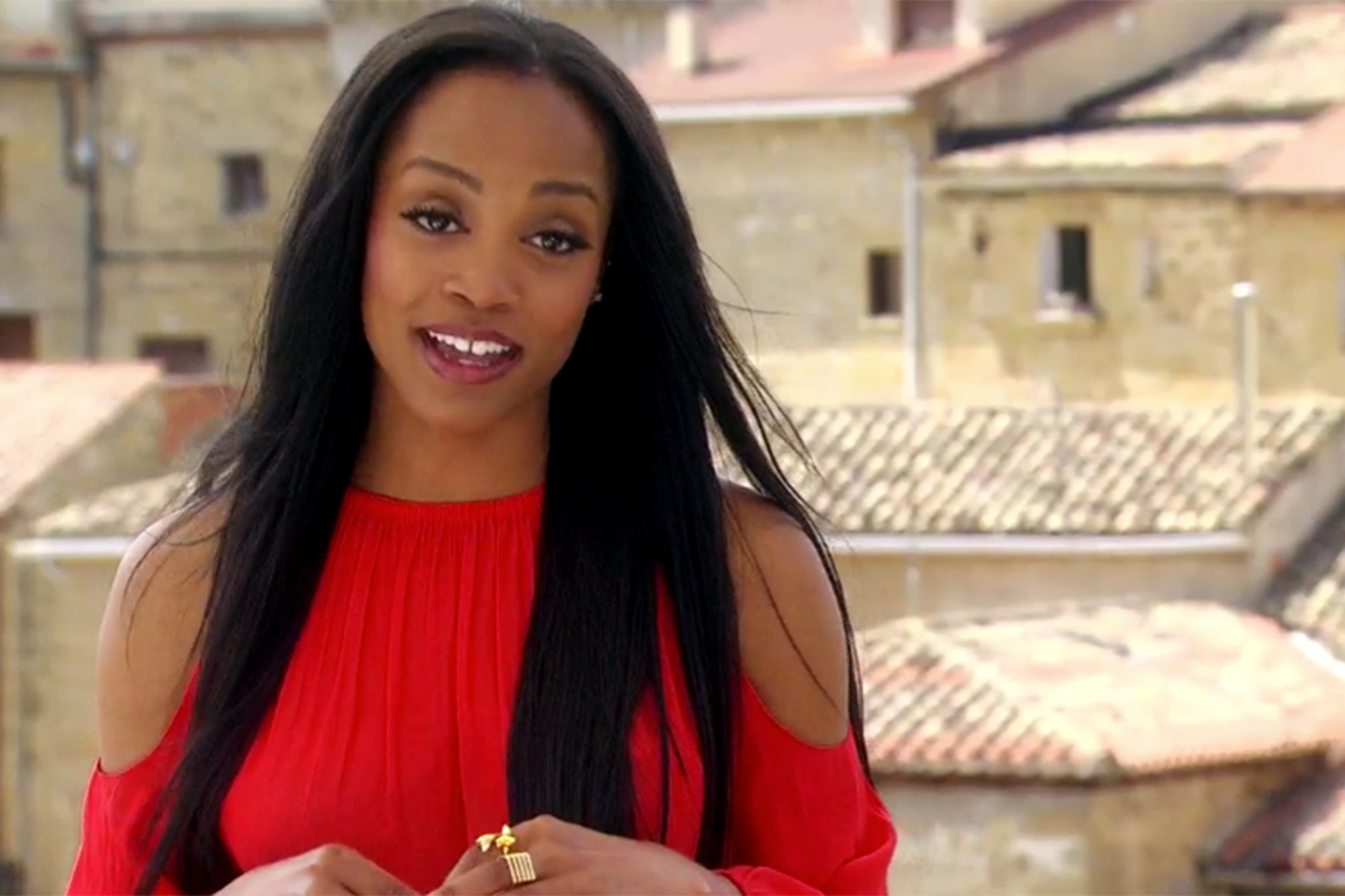 This week Rachel is taking the men home to meet her family. I don’t know about you but I am ready for this season to be over. It has been a bit of a snoozefest for me. My notes keep getting shorter and shorter each week because nothing interesting is happening. Anywho Rachel is doing things a bit different than past seasons. She is taking all 3 guys home to meet the family & have overnights. Also for family visits all the guys are still staying in the same hotel room which makes it extra awkward. Of course Judge Lindsay won’t show on camera. Could be he isn’t allowed or doesn’t want to be. Probably both.

They start out at a baby clothing store so that they can get some presents for Rachel’s nephew and nephew to be. Once they are done there it’s time to head to the Lindsay’s house. Before they go in the house Peter wants to sit down with her to express better how he feels. He thinks he didn’t say enough after his hometown and wanted to be clear how he felt. He told Rachel

that he is falling in love with her and she excitedly said it back. Time to meet the family. All the guys are going to meet Rachel’s big sister Constance, her brother-in-law Alex, her mom Kathy, her aunt & uncle Connie & Jeff and her cousin Andrea. During lunch/dinner (I have no idea what time it is) Peter puts it out there how he feels about Rachel and it is nothing but lovely things of course. He even throws some things in there that he hadn’t even said to Rachel yet. Alex asks him if there are any red flags with Rachel and Peter says none yet. Rachel gets that same question from her mom and she says that he may not be ready to propose. Of course then her mom asks Peter what is it about Rachel that would make him want to propose

and he says he isn’t sure in the next two weeks he will feel that 100% certainty. He doesn’t want to ask for her hand until he is. Her mom seems to be able to respect that which means that Rachel’s family is not going to buy what Bryan is selling, hopefully. They are a family of cautious skeptics so Peter is someone they can understand. Overall the family LOVED Peter but seriously how could you not?! Grade: A

Rachel starts the date by taking Eric around to explore Dallas. He is probably the most nervous of the three men to meet her family. It makes sense because you know he is going to get grilled for never being in love or in a serious relationship before. He has only met a girl’s family twice, once for high school prom and once in college when his girlfriend took him home for

Thanksgiving. When he walks in the house he seems VERY awkward as he says hello to everyone but once they all sit down in the living room he seems to ease up and gets more comfortable. Straight off the bat her sister doesn’t see the same sort of connection with Eric that Rachel has with Peter. At one point during his conversation he seems to say “I love her unconditionally but I’m not in love with her,” did I hear that correctly? I must have misheard because Constance breezes right over that. Mom asks him how he knows he is ready for marriage. He says that he has been single for a long time and he is at a point where he wants to be a husband, have kids, and be committed to someone. He aspires to have a family like Rachel’s

and asks for Rachel’s hand in marriage to which her mother says she trusts her daughter and if Rachel decides he is the one she is on board. I have said this the past few weeks but I really do like Eric more and more with each episode. My only reservation is that he really doesn’t know what being in love feels like so how can he know that what he is feeling now is love? Out of the three relationships they seem to have the least amount of passion but their friendship aspect seems solid and they grow with each day. Grade: B

Rachel comes to pick him up from the hotel and OF COURSE he has to bring up their matches watches. Dude it doesn’t mean as much as you think. What I love is I am pretty sure, after they leave, Peter throws some shade towards Bryan. He is talking about how Bryan is from Miami land of the fake boobs, fake butts, and FAKE CHEEKS. Are those big cheeks of Bryan’s

fake?? Hmmmm To start the date Rachel is taking Bryan to brunch with two of her good friends, the same two who signed her up for the Bachelor. Of course he thinks this means he is in the lead because the other guys didn’t get to meet friends. Ugh seriously. At brunch Rachel says that at first she thought Bryan was a douchebag because of how smooth he is. I still agree with that assessment. As soon as Bryan walks into the Lindsay house he is interrogated to the max. First up is the subject of his mom vs. Rachel asking where his loyalties would lie if there was an issue where Rachel and his mom didn’t

see eye to eye. He says of course he would side with his wife…somewhere his mom just passed out. For the record I don’t not believe him for a minute! During lunch/dinner they really go at him with the questions and they just don’t seem to buy anything he says. He gets up for a moment and Rachel goes at her family for being harder on him than they were with Peter & Eric. Constance says he is open and direct but she doesn’t believe there is an sincerity there. Amen sister! During his time with Constance he doesn’t help matters when he says he loves her family. She calls him out saying you have known us for an hour. I love her sister! Bryan asks her mom’s permission for Rachel’s hand and she gave him the same response she gave Eric but she seemed to mean it more with Eric. Grade: C-/D

Now it is time to travel to Espana for overnights!! 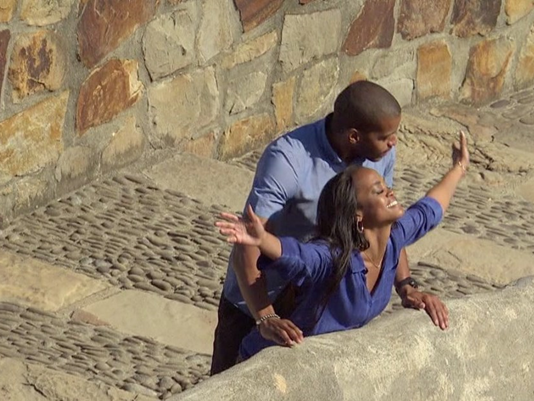 Rachel says she is most confused about him and where his feelings stand out of the three men left. They start their date taking a helicopter ride. They do have cute chemistry but I still don’t feel the passion coming from them. After the helicopter they go to an old monastery where they make a wish and than ring the bell three times. During their dinner Rachel asks Eric how he feels and he FINALLY tells her that he is in love with her and how he has never felt this way about a girl before. She now feels like she knows exactly how he feels and gives him the fantasy suite card. Of course he says yes and that is pretty much the end of this boring overnight. 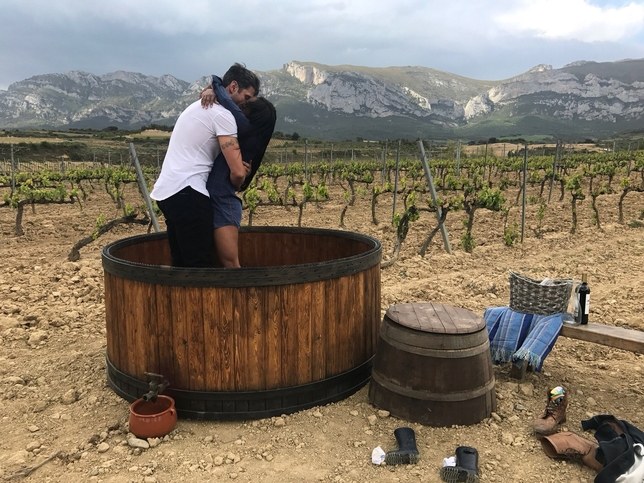 This date consists of exploring a beautiful vineyard. The owner comes down to the cellar to talk to them…in Spanish. Rachel apparently speaks enough to get every few words but Peter looks like a deer in headlights. They needed the subtitles that us viewers got. He gives them a key to their own wine locker with their names on it. Very romantico! They go outside to chat and in the middle of a very intense conversation about how he may not be ready to propose an adorable little girl comes to ease the tension and take them to stomp some grapes. At dinner that night Peter tells her that his parents have a tradition where every time they have a bottle of wine they save the cork and write a message on it so he kept the cork from their wine that day. She melts. Now it is time to get back to their earlier conversation. Rachel talks about how she didn’t come to do this again, put her life on hold, just to have a boyfriend at the end of this process. She doesn’t think that just because they get engaged that automatically means marriage whereas Peter thinks if he gets engaged it pretty much means time to pick a date and get married. He only wants to do both those things once. She says that if he is the one at the end then one of them is going to have to bend and she doesn’t know that either of them will. The episode ends with her in tears and saying this is the first time she is thinking that things with Peter may not work out. 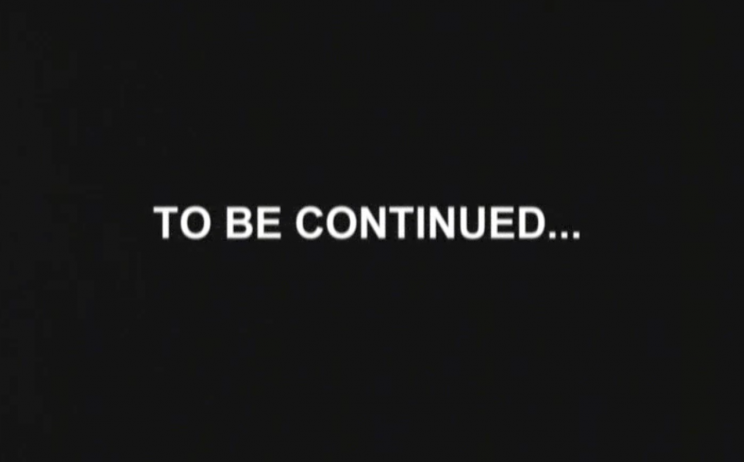 All I have to say is this better be a Bachelor ploy to throw us all off. There is a LOT of speculation that he doesn’t get picked so that he can be the next Bachelor but I am sticking with my initial prediction that he will win.