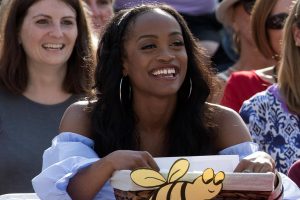 First things first if you haven’t heard about the drama around ‘Bachelor in Paradise’ you may be living under a rock. While I have my thoughts/opinions on the situation I am keeping those to myself until all of the information is brought to life. It is a delicate situation and all the hearsay is making it very confusing to understand what exactly went on. I will say that I am bummed that BIP won’t be back this summer, if ever. Now let’s get to recapping….

We left off with Eric yelling at all the guys to stop talking about him. I mean I get it to a certain extent but he is being a bit dramatic about it. Then of course we have good ole Lee stirring the pot even more. I haven’t liked this guy since the beginning and I REALLY don’t like him after this episode. He then goes to interrupt Kenny’s time with Rachel and was not only rude but he was childish too. I know interrupting is part of the game but there is a polite way to do it and the unspoken rule is if you already had time with her you are done for the night. All the while Dean is talking to producers about how Lee is only picking fights with people who he isn’t used to seeing “from a cultural perspective” because Dean is sweet and trying to talk around what he really means….Lee is a racist ahole….as shown here.

Side note: I don’t get a great vibe from Bryan but she seems to really like him so we shall see.

Highlight of the cocktail party: Kenny pulls Lee aside to confront him about the interruption. He considered Lee a friend and didn’t like how he acted. Things get a bit heated but in all fairness Lee was egging it on. I mean who says, “I get tickled when I smile and an angry man gets angrier.” He is seriously an ass. With that Rachel gets emotional about how disappointed she is in the guys right now and how no one understands how hard this is. With that the cocktail party is over and it is time for the rose ceremony.

Leaving: Diggy, Brady, & Bryce….couldn’t she have kept Diggy instead of Lee 🙁

Off to Hilton Head, SC 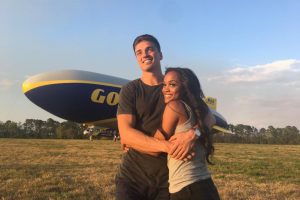 The date starts with them taking a jeep to an empty field to have some champs on a blanket on the hood of the car. I have to say from the start you can tell that Rachel & Dean have a great connection. The guys are thinking he is too young for her but as the date goes on you can tell that age isn’t a factor with these two. While they are chatting a blimp comes along and of course

you know that is going to be their date.  Dean is terrified of heights and you can tell just how nervous he is, it is adorable. They take turns driving the blimp and by the end Dean seems to have relaxed. Of course they fly the blimp right past the guy’s hotel just so they can see the that is says “Rachel & Dean 4Eva”….just another typical move by the producers. For their dinner date the setting is absolutely gorgeous and uber romantic. They talk about their upbringing (we already know about Rachel’s) and Dean opens up about how when he was around 11 his mom got breast cancer and beat it but then it came back and unfortunately she passed away when he was 15. He said he remembered when she was in hospice asking her when she was going to come home and she told him “never.” Then he talked about how after that his

close knit family just fell apart and he was basically alone to raise himself from 15-18. Excuse me while I go grab some tissues. I am liking this guy more minute by minute and considering what my first impression of him was, he has changed my mind completely. Rachel gives him the rose and then they attend another typical producer set up…a concert by someone I have never heard of, Russell Dickerson. Dean has now solidified being one of my final two choices. 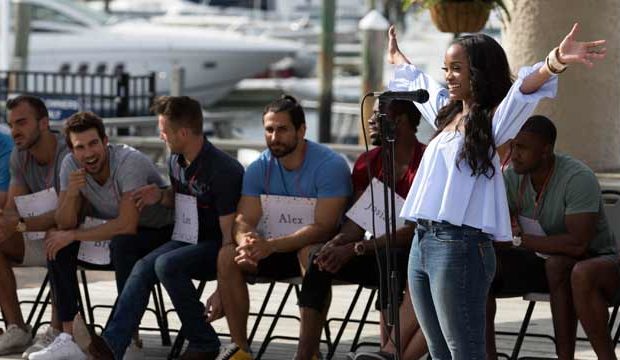 We start out the date on a boat filled with dance circles, limbo, push ups, and rapping. Tickles of course has no moves but bless him for trying; Josiah is the only one to take on the push up challenge; Kenny is pretty decent at freestyle rapping, Peter is not but I don’t care, he can do no wrong. Everyone seems to be having a good time and able to let go of all the

drama so so far the date is a success. What else to do after drinking & hanging out on a boat….a spelling bee….oh this should be good! Of course all the words start out easy: squirt, passion, caress but they get harder as it goes on. Kenny is out first on champagne, Iggy on boudoir, Eric on facade (he wasn’t even close), and Peter on coitus (Q really Peter? Maybe you can do a little wrong.) Josiah gets points for asking if he can use stunning in a sentence to describe Rachel but loses points by hamming it up too much while up on stage. Next out is Anthony and then Will leaving Josiah left. He spells polyamorous and wins the Bachelor Spelling Bee. By the way my spell check does not think polyamorous is spelled correctly. Off to the night portion of the date where things take a turn. It starts off well with her time with Peter. These two definitely have a great connection & chemistry. He

is the other one of my final picks plus she is licensed to practice in Wisconsin, that has to be fate right?? Her time with Eric is ok but to me their connection seems forced and I still am not a fan of his. Next Iggy wastes his time AGAIN but this time talking about how he doesn’t believe Josiah is there for the right reasons. First Eric, now Josiah…Iggy how about your spend your time getting to know her rather than talking about other guys. Not only does he talk about the other guys he then goes and tells Josiah that RACHEL was the one who brought him name up. Dude stop lying. Lee, not surprisingly, uses his time to tell Rachel that Kenny was aggressive towards him and berated him for 30 minutes while all Lee was doing was trying to hear him out. Oh shut up you little shit. I can’t stand this guy. She then goes

to Kenny to try and get to the bottom of things and while he says in hindsight he didn’t handle it like he should have he felt like Lee was baiting him but that he was never aggressive towards him. After their chat Kenny feels like Rachel is in Lee’s corner so he decides to go and talk to Lee yet again. I understand being frustrated but by doing this you are once again playing into Lee’s hands. Of course we got the dreaded to be continued! Next week is a special two night event with Kenny and Lee going on a two-on-one date (shocker) and if she does not send Lee home I am going to scream.

And because I find AJ hilarious here is this gem:

Many poker participants are usually looking for a opportunity to raise their profits
as well as their efficiency.