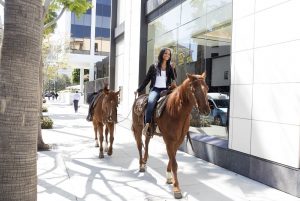 Tis that time again. I have to say I STILL do not have a front runner for this season and that means that either there are some good quality guys for Rachel or they are all just so so. Usually by now I already have my final pick but I am still stuck on 3 choices: Dean, Kenny, & Peter. I could cheat and go google who wins but I didn’t like knowing what would happen last season so I am trying to not do that again. Full disclosure: I had already picked Vanessa as my final pick BEFORE I read the spoilers! Let’s get started where we left off….DeMario trying to crawl back for a second chance. Short version: She says no. Getting back to the cocktail party, first up is tickle monster Jonathan and his huge hands. Which as much as it is cheesy I have to admit I found them pretty funny. I want a pair of those!

Next up is Alex, who attempts to solve a Rubik’s Cube while talking to Rachel. He is trying really hard to show that he isn’t just a meathead. Kenny shows some pictures of this daughter. Will plays some hoops and uses some smooth lines on Rachel, which she loves. Now it’s time for Lucas, who is probably my least liked Bachelorette contestant ever, and Blake is a close second. Their stupid little feud is irritating and about to get even more annoying. Lucas tells Rachel that he thinks Blake has a crush on him because, he claims, Blake was standing over him while he was sleeping eating a banana. Ummm seriously WTF. Then it’s Blake’s turn to defend himself and he does that by saying he doesn’t even eat bananas because he is on some diet I have never heard of. Is this seriously what I am watching right now??

Now we have to watch Blake complain that it is Lucas’ fault that he was sent home and then the lamest, more childish fight between these two idiots. Good riddance boys! 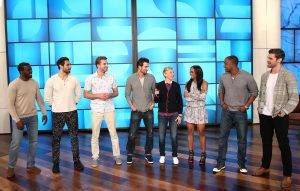 I love this date! Ellen is the best! We start with Ellen and Rachel discussing the men as they enter the studio building. Ellen is not a fan of the tickling or the Urkel entrance Will made on the first night. In front of the studio audience Ellen asked Rachel if she has kissed any of the guys and she gushing a little to much for my taste. All the guys know there will be kisses 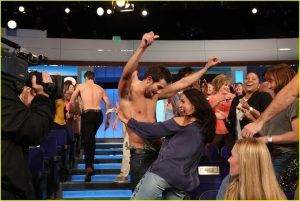 but gushing about it is just going to make the ones who haven’t kissed her yet insecure. I didn’t like her doing that. We all know Ellen loves to dance so of course the first thing she has the guys do is take their shirts off and dance in the audience. Poor Jonathan has no rhythm but it was cute how hard he tried. Alex was a little too into it. Ellen decides so far she likes Will the best. Next up is a game of “Never Have I Ever” and this is always one of my favorite segments that Ellen does. This is a great get to know you game and she always makes it fun to watch. Here are the questions she asked the guys:

Hit on someone while on a date with someone else: All said I have never
Thought about having sex with Rachel: Alex & Peter said I have never, do we believe them?
Peed in the pool at the mansion: Alex said he has
Texted a nude selfie: Will, Peter, & Alex have
Hooked up with someone twice their age: Fred has, we know he likes older women
Met Rachel before coming on the show: Fred of course, Again I am over Rachel bringing up how he was as a kid. Fred is too.
Kissed the Bachelorette: Will, Peter, Bryan have 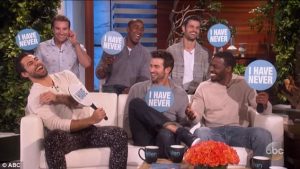 Now onto the night portion of the date…Alex is up first and talks about how she makes him nervous but that is a good thing because it has been a while since he has had butterflies, he gets a kiss. Will up next and she loves how smooth he is. She spends her time with Bryan and Peter making out. Up next is Fred and oh this one hurts my heart. He has been talking about how he has wanted to kiss her for 20 years but he doesn’t want to rush it. When they sit down he asks if he can kiss her and instead of her thinking it is sweet she tells him now she feels awkward. He goes ahead and just does it anyways. You can tell by the kiss that he is feeling it and she is NOT so it is no surprise that she pulls him aside and ends up sending him home.

Back at the mansion Eric is starting to spiral and freak out that he isn’t feeling much from Rachel. He is starting to question if she is there to find love because he is getting no validation from here. This will come up again and again for the rest of the episode.

One-on-One with Anthony: Meet Me at the Rodeo 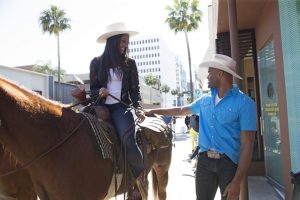 This date consists of riding horses up and down Rodeo Drive in Beverly Hills. Now I have never been to Rodeo Drive, at least not that I remember, but I wouldn’t think that you would be allowed to ride horses down the street and into stores! Apparently either I am wrong or Bachelor nation has that much power. They take the horses into two different stores to get 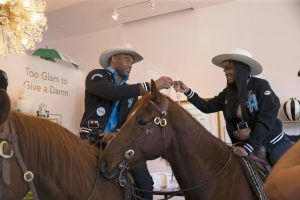 some cowboy clothes and then to the Sprinkles cupcake dispenser which just so happens to have a horse cupcake. So bizarre. At dinner Anthony talks a bit about his childhood and says while they weren’t rich with money they were rich with love. How he wants to be able to give to his family what his father gave to him. They don’t really seem to me to have much of a connection but they did enjoy their date and I guess it was enough for Rachel to give him the rose and a kiss.

Back at the mansion Eric is yet again talking about how he doesn’t feel like Rachel is giving him what he needs up to now and Iggy decides to confront him about it. Eric starts to get a little heated which again is just a preview for what is to come. 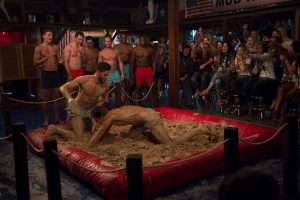 This date is brought to you by Raven, Corinne, Jasmine & Alexis, maybe they really are all friends. It starts with a little pole dancing in the bus ride and a little throwing Eric under the bus by Bryce & Lee. The group then pulls up to a saloon that has a mud pit set up inside for some wrestling, time for Kenny to shine. Most of the guys seem a little nervous to go against

Kenny with the exception of Bryce who thinks he is the strongest in the group. The first match is Brady vs Bryce with Bryce coming out on top. Then Dean vs. Eric, with Dean the winner. Next is Lee vs. Adam, which Lee wins. Then Kenny vs. Jack and Jack gets thrown around like a rag doll. Next is Lee vs. Kenny, Lee gives Kenny a little bit more competition but not enough…I love how Kenny pins Lee and the blows a kiss to Rachel..swagger! Unfortunately Kenny loses the final battle against Bryce but to be fair Bryce got to rest for 4 rounds and Kenny had to wrestle 3 in a row. While the guys go get cleaned up Rachel meets with her girls to discuss who they like and who they have reservations about. Corinne likes Adam, while Raven & Jasmine like Dean. All the girls seems to have reservations about Eric based on what other guys have said. 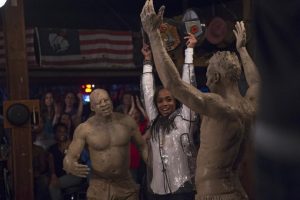 During the night time portion of the date Kenny lets Rachel know he used to be a Chippendales dancer and gives her a little show; Adam asks what she wants in a man in one word and she says secure; Her and Dean are on fire per usual; Her and Jack have a pretty boring one-on-one, I don’t see any chemistry there; and then it is Eric’s time. He talks about how he is vulnerable and needs some validation from Rachel. She says she wants to get to know him but not move to fast. She also confronts him about how his name was mentioned twice about how he was questioning Rachel’s motives for doing the show. Eric then goes to confront Bryce and Lee who both claim what they said was taken out of context. Eric believes Bryce is being genuine but Lee is not. Lee tells Eric he loves him about 20 times, not sure what that is about. Date rose goes to….Eric and I do NOT agree with that choice.

Both Iggy and Lee use their time to talk about Eric again and while I usually think it is dumb to use your time to bash someone else I don’t get the best vibe from Eric so I support this. After this Rachel goes to find Eric to talk to him about why his name keeps getting brought up and starts questioning if she should have given him the rose. She ends up deciding that he can keep the rose but her antennas are up. From there Eric calls a house meeting to confront everyone about why his name is in everyone’s mouth. He says the word mouth about 80 times and it was driving me insane. He starts to get pretty hostile and then of course TO BE CONTINUED…..Bryan’s face explains it all:

Review: All the Missing Girls by Megan Miranda