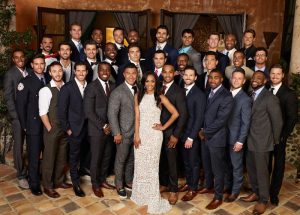 ‘Tis that time again rose lovers! Full disclosure I much prefer ‘The Bachelor’ over ‘The Bachelorette’, but I am dedicated to the franchise and I really like Rachel so hopefully this season is a good one!! Let’s get to recapping…

We start off getting some background on Rachel, most of which we already know, she is a 31 year old civil litigation lawyer from Dallas who is ready to find Mr. Right. The highlight of this little intro is the old lady who tells Rachel not to sleep with all of them. Great advice grandma! Now time to highlight some of the men….

Jack, 31, lawyer from Dallas (maybe they know each other), tells the story of his mother who passed away from cancer when he was in high school

Alex, 28, from Detroit, people think he is just a meathead but secretly is a nerd who enjoys coding and technology

Mo, 26, from San Francisco, dances Bollywood (and gets drunk night 1)

Lucas, 30, a weirdo from California who has his own word “Whaboom” and will proceed to annoy the crap out of me all episode

Blake, 31, personal trainer whose little intro makes him seem like a real gem, talks about his high libido and amazing penis, really dude???

Diggy, 31, from Chicago, got his nickname because he loves fashion, owns 575 pairs of sneakers!

Josiah, 28, prosecutor, who has an interesting story-his older brother was bullied for being overweight so he took his own life when Josiah was 7, that made Josiah start getting into trouble and was arrested for burglary at age 12 and from there changed his life around because of a judge who was his inspiration to become a lawyer

So far the line up seems so so.

Next Rachel meets up with some of her “friends” from Nick’s season to go over the guys she already met. Just once I would like the new bachelor/bachelorette to NOT have to meet with old cast members. Anything for these alums to get 5 more minutes of fame. Whitney warns Rachel that Blake E isn’t there for the right reasons. Wait “amazing penis” guy isn’t there for the right reasons? You don’t say! Side note I thought I was done with Corinne, at least until “Bachelor in Paradise”….did we have to bring her back for this episode?!

Now time for the worst (or maybe best) part of the season…the limo entrances.

Peter, 30, Business Owner from Wisconsin, normal entrance so already I like him…plus they have matching gap teeth 🙂

Josiah, who we got to meet earlier, used a cheesy legal line but it made her laugh so I will let it pass

Bryan, 37, Chiropractor who greets her in Spanish…watch out for those Latin men!

Kenny, who again we met earlier, does a little dance move with her…cute…another one that I like for her

Bryce, 30, Firefighter, “sweeps” her off her feet

Diggy, 31, met earlier, guy with all the shoes

Kyle, 26, Marketing Consultant, shows her his “buns”…food buns of course

Blake K, 29, Marine whose grandparents got married after dating for only a few months and have been married for 65 years

Brady, 29, Model, who comes with a sledgehammer and a block of ice, hits it and says “I just had to break the ice”….NO

Dean, 25, Startup Recruiter, “the black and never go back” guy we already met on After the Final Rose, seems to now think that line wasn’t the best one, ya think? Although she says it was cute and showed confidence so I guess no harm, no foul

DeMario, 30, Executive Recruiter, we met him on After the Final Rose, the Vegas tickets bit, made a good first impression

Blake E, 31, “Aspiring Drummer” aka world class dbag, came in with a marching band, compensating much?

Fred, 27, Executive Assistant, brought his yearbook because they went to elementary school together, I like it!

Lee, 30, Singer/Songwriter, came out singing on his guitar, meh

Matt, 32, Construction Sales Rep, came in a penguin costume because they mate for life and because she wore penguin pajamas last season…too similar to Dolphin/Shark girl for my taste 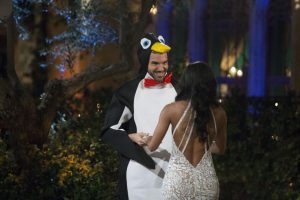 Michael, 26, Former Pro Basketball Player, who brings brownies and the line “the blacker the brownie the sweeter the dude”

And in the name of saving the WORST for last….

Lucas, 30, Whaboom guy and resident “producer placed” contestant, comes with a bullhorn entrance revealing his stats which include two different sized testicles and then this:

I want to slap him.

Who are your initial picks to make it a long way? So far I am liking Kenny, Fred, & Peter. She seems to have a connection with Bryan but I don’t get a great vibe from him. Only time will tell.

Review: All the Light We Cannot See by Anthony Doerr