Home Television ‘The Bachelor’ Episode 8 Recap: The Good, The Bad, & The Spoiled

‘The Bachelor’ Episode 8 Recap: The Good, The Bad, & The Spoiled 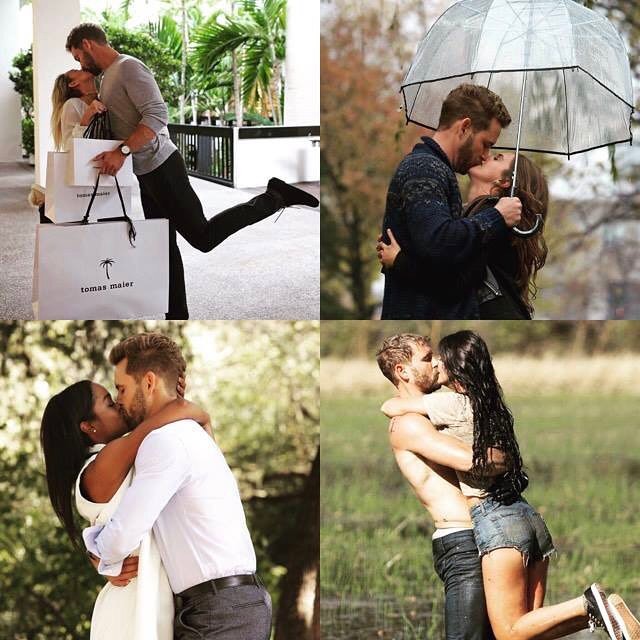 Tis that time of the week again fellow rose lovers! Based on the pictures above from last night’s hometowns who would you say has the best connection with him based solely on the kiss? I want to say Vanessa since she is my pick but if I had to base it on those pictures it would be Rachel or Raven. We know Rachel doesn’t end up being the last lady standing so I guess Raven wins the best kiss picture.

We left off last week wondering if Nick was really going to have four hometown dates or if someone would be leaving after Kristina. While Corinne freaks out that she is next, Nick decides to come tell the ladies that he wasn’t going to have a rose ceremony but he wanted to still give them their roses. With that it is off to hometowns!!! 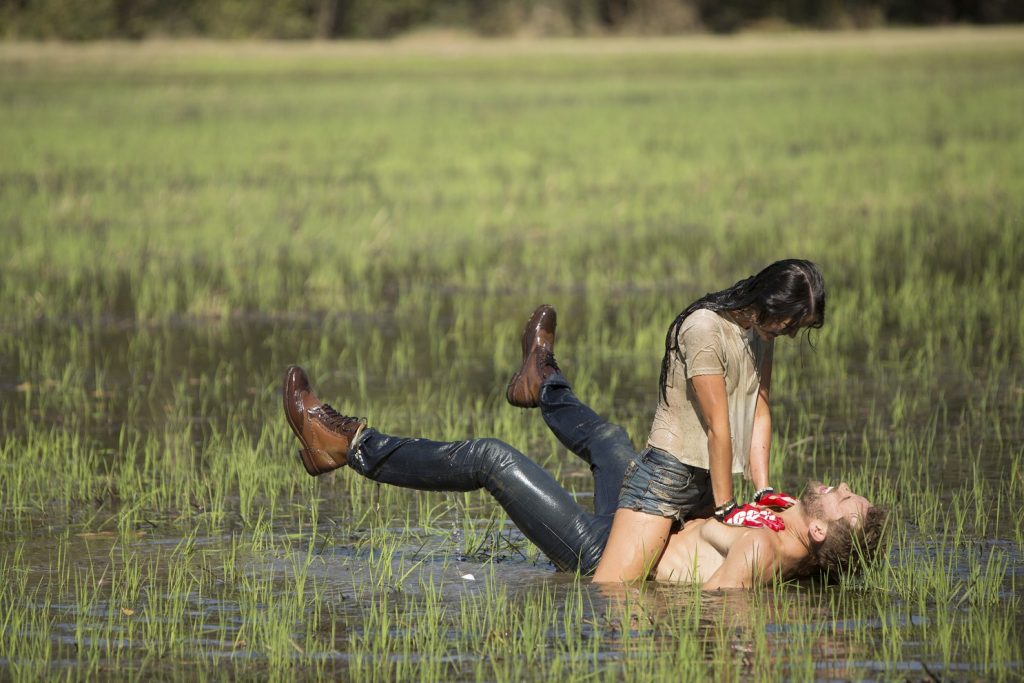 This date if full of ATV riding, grain bin climbing, and swamp kissing…..That’s So Raven! Forgive me for that one but I had to. Raven pick Nicks up on her ATV for some riding around in the swamp on their way to the grain bin,

where apparently the people of Hoxie go to have meaningful conversations. Hold up, is that a cop coming to break up their fun? No that is just Raven’s brother Weston pretending that they are in trouble, that Raven is such a prankster. From there Nick gets his own ATV to ride around the mud in, gets nice and dirty so he can take his shirt off, and then makes out with Raven in the swamp water. ICK! After possibly contracting a number of waterborne diseases it is time to clean up and head to meet the family, dad Wesley, mom Tracy, & brother Weston. It starts out with some wonderful news for the family, her dad recently had a scan and he is officially cancer free. Raven sits with her dad first and

expresses how happy she is to know that he will be there to walk her down the aisle, it is a very sweet moment. Next she sits down with her mom and talks about how she was worried that Nick was going to be arrogant but that she has fallen for him and her mom wants to know if she is ready to open up and say those three little words. Raven still seems guarded which prompts her mom to say, “everything is easy when you find the right person.” Is she saying because Raven can’t say “I love you” that he isn’t the right person? Hmm I think that is a sweet sentiment but love ain’t easy woman! Meanwhile Nick and Wesley are chatting about if her dad would be comfortable if

this ends with Nick & Raven being engaged. Although he didn’t expect to like Nick he admits that Nick is actually a really likable guy and that he trust his daughter’s judgment but he doesn’t want any surprises, even after this is over. AKA if you pick someone else and that doesn’t work do not come near my daughter. Seems Wesley has seen the show before. Raven tries to tell him she loves him at the end of the date but she just can’t get herself to do it. Instead she tells Nick that she feels reassured and that there is no hesitation on her end. Step it up woman, by this time in Bachelor world (6 weeks) you should be telling him you love him! Do you now know how this works?? Overall Raven’s hometown went quite well. Her family seems sweet and welcoming. 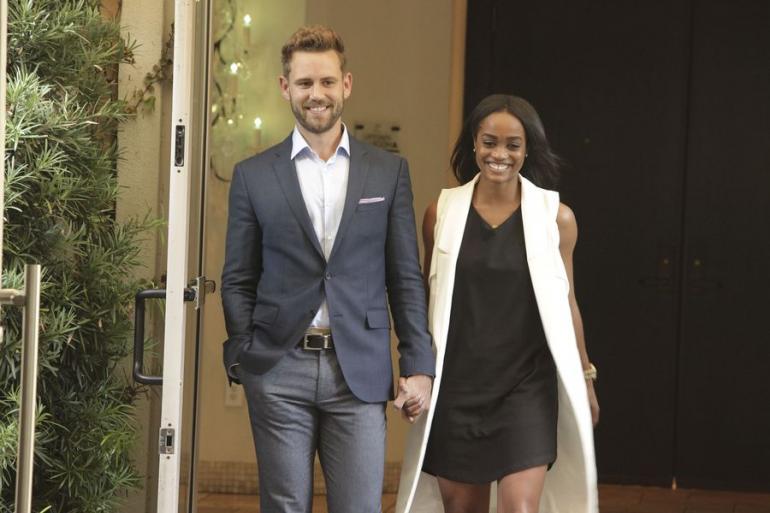 Rachel decides that during her hometown date she wants to take Nick to church, literally. She says she is worried he will feel out of his comfort zone, which at first it clearly seems like he is, but in the end “amen is amen” and faith is something that

has always been part of his life so he appreciates that about Rachel. After church they sit to talk about the fact that this is the first time Rachel is taking home a white man and that they realize that they are not the same race but it isn’t something that matters to either of them. Nick response to this is just perfect, “I’m not color blind. I know you’re black. But the reason I gave you the first impression rose was because of how easy we connected, my attraction to you physically, that you were just a very beautiful, impressive woman.” He seems to be the most nervous to meet Mr. Lindsay but turns out he has to work and won’t be there. Nick sure did dodge a bullet there.

Off to meet the family with consists of mom Kathy, younger sister Heather, cousin Andrea, older sister Constance, brother-in-law Alex and nephew Alistair. Straight out of the gate Nick is in the hot seat when they ask him if he knows what he is about to eat and his response was great, “I’m not for Mars.” It lightens up the room a bit. Both conversations Nick has with her family centers around the fact that he has never been in a serious relationship with a black girl. Rachel’s sister just wants to make sure they understand how to navigate in today’s world being in an interracial relationship and if anyone can help with that it is her since she herself is married to a white

man. His conversation with her mom went along the same lines just making sure he knows what he could possibly be up against and again he handled it well. She also asked him if he saw any red flags when it comes to Rachel but Nick doesn’t seem to have any and just continues to praise Rachel. Next Rachel has some time with her mom who says, ““I like what I see with Nick. So far he seems comfortable around us. What attracted me to your dad was he knew who he was, where he was going… And that’s what I see in Nick.” Now that is an endorsement if I ever heard one. It is very disappointing that we already know she won’t be the final girl. Thanks a lot Bachelor producers! 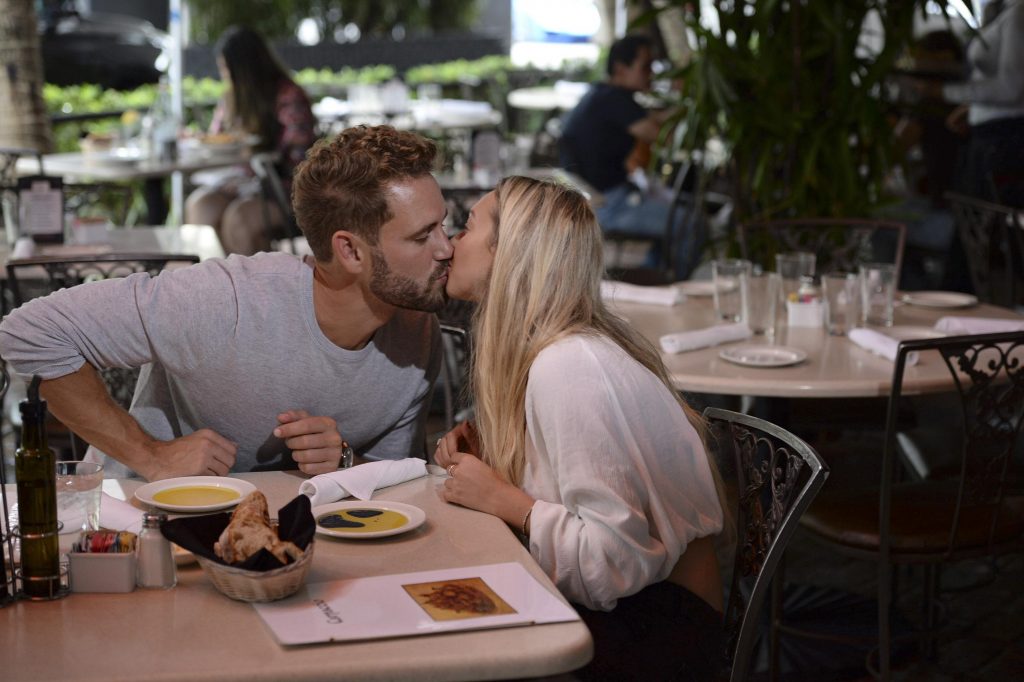 Now for the hometown we have all been waiting for, Corinne. She of course plans her date to revolve around shopping. Is anyone surprised? It’s like Pretty Woman but Nick is Julia Roberts and Corinne is Richard Gere, well Richard Gere with

his father’s credit card. Some of the best things Nick says: “Every time Corinne walks into a store, it’s like Christmas morning for the people who are working in the store” & “If Corinne and I wind up together I may need to get a couple jobs.” At least he realizes how high maintenance she is. Nick proceeds to try on a bunch of overpriced clothes until Corinne finds something he just has to have. At least when this relationship ends he will have a $3000+ outfit to remember Corinne by. After their shopping spree they go get some lunch and Corinne tells Nick she loves him and it feels so disingenuous, just like their

entire relationship. From there they go meet Corinne’s family, dad Jim, mom Peri, Sister Taylor and of course Raquel. After indulging in the “world’s best olives” Corinne and Jim go off to chat and of course he is mainly concerned about how Nick is going to support Corinne’s lifestyle and if he can’t is she ok being the breadwinner. I don’t know Jim, are you ok supporting Nick? Meanwhile Nick is meeting with Raquel instead of Corinne’s mom and that says all I need to know about how that family operates. Now it is time for Nick to sit down and have some 15 year old scotch with Jim while he proceeds to emasculate Nick by telling him not to worry about things because Corinne has no problem being the breadwinner if he

can’t find a way to sustain her lifestyle….ummm thanks I guess. He then says if Corinne is happy than he is happy. Quite frankly I feel like he would say yes to anyone who wanted to take his daughter off his hands. IJS. This is pretty much spot on to what I imagined Corinne’s hometown date being like and I hope that is finally when Nick let’s her go. Although I do think it would make great television to see Corinne meet Nick’s parents. 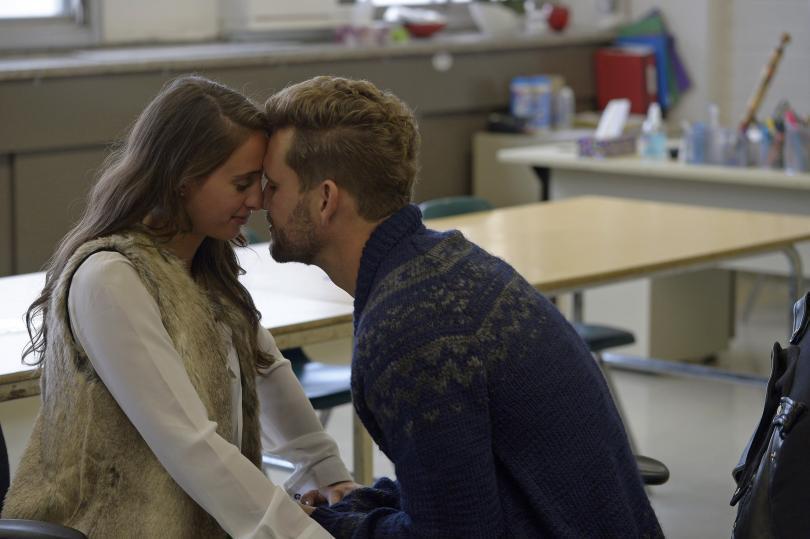 Before I get into this hometown date can we please just acknowledge how cute they are in the picture above. If that doesn’t look like two smitten people I don’t know what does. The first thing Nick & Vanessa do is go visit her students, who are

special needs adults 21 and over. The minute they walk into the school you can tell the amazing bond Vanessa has with her students. I have to say it got me a little choked up. They go into the classroom and make another scrapbook but this time with all the pictures from their relationship thus far. This was by far the best part of any of the hometown dates. Unfortunately from here this hometown goes downhill thanks for her overbearing family. Since Vanessa’s parents are divorced they will be going to her mom’s first to meet 875 people and then to her dad’s. At her mom’s Nick meets, ready for it, mom

Mary, sister Melissa, brother-in-law Sandro, nephew Remel, brother Patrick, aunt Catherine, cousins Luca, Karen & Jack, Uncle Louie, two best friends Jennifer & Adriana, and of course Nonna & Nonno. WHEW! Nick proceeds to get grilled by her mom, who wants Vanessa to find someone to be her equal (and it seems she doesn’t think Nick can be), then by her sister who says Vanessa tends to put her happiness and dreams aside for others. They common theme seems to be that Nick & Vanessa haven’t really talked about what would happen if they worked out, mainly where they would live, and also they are all so worried that she will get heartbroken. That is understandable in this situation but that is all they can focus on. All

I can think is her last boyfriend must have done quite a number on her. After this visit I have no idea how Nick has it in him to go see her father but off they go. Her dad is just as tough on Nick and when Nick asks for his blessing if it ends up being Vanessa at the end he says he can’t give it to him knowing he asked the same thing of 3 other fathers. After a little more talking he gives in and says he trust Vanessa’s judgement. He then proceeds to tell Vanessa that Nick asked for the blessing from him (excitement) and then quickly tells her that he also asked the other fathers (disappointment) but really what did she expect. She is on a reality dating show for goodness sake. This hometown started off with such promise but just ended so badly.

With only 5 minutes left of the show we clearly won’t be getting to a rose ceremony tonight but wait what is that? Someone is at Nick’s door, who could it be??

Seriously? So lame. Tune in next week to see what the heck Andi wants and who will be going home.