Home Television ‘The Bachelor’ Episode 7 Recap: To Bimini and Beyond

‘The Bachelor’ Episode 7 Recap: To Bimini and Beyond 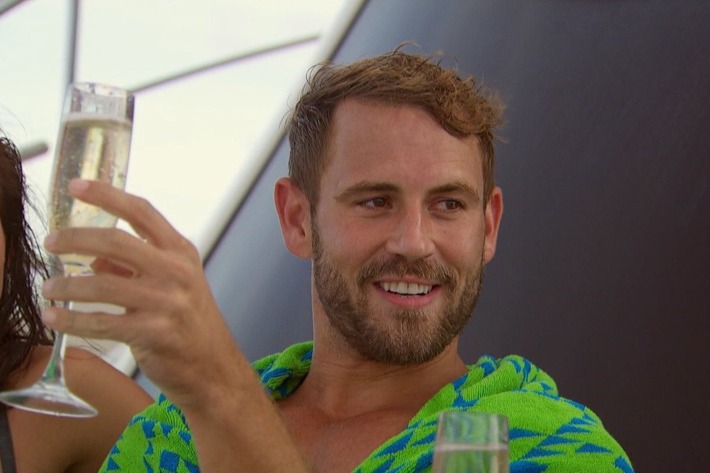 Welcome back rose lovers…we open to all the ladies pondering about the night before and wondering if Nick is going to throw in the towel or continue on this wonderful journey of love. I am pretty sure he is contractually obligated to keep going to let’s dive right in. After having a heart to heart with guru Chris Harrison, Nick goes and visits the ladies to apologize for the night before. He says that although it was hard sending Danielle L home, his relationship with her didn’t compare to the relationships in the room and that he wants to get all the way. He decides to cancel the cocktail party & rose ceremony and just head straight to the next stop….Bimini, which according to the girls “is the perfect place to fall in love.” Is every single stop the “perfect place to fall in love?” Let’s be a little more original ladies.

Look how excited V is for her date tonight. I am telling you I bet on the right girl this season! Nick & Vanessa go on a pretty typical Bahamas date, boating & snorkeling. Apparently Vanessa has never been on a boat or been snorkeling so I guess this is an exciting date for her. I have a HUGE fear of the ocean so this date it not my thang. Vanessa lets Nick know that she was really starting to worry that they weren’t on the same page with their feelings and that she got really scared when he sent Danielle home because that could have been her. After they talk and she feels better they dive in to go snorkeling. Someone needs to let them know how snorkeling works. First the tube goes into your mouth and

second you can’t submerge yourself under water. I know you have never done it before, Vanessa, but you speak three languages, this should be common sense.

Next it is time for dinner and for Vanessa to open up and let Nick know that she is falling in love with him. She tells him that she hasn’t had that feeling for years, that she sees a future with him, and loves how easy it is to be with him. Unfortunately she didn’t get the response she wanted. Nick lets her know that he really, really likes her but that he wants to save saying “I love you” to the last lady standing so that it means more. She isn’t too happy about that but I have to say I completely agree with what he is saying, it cheapens it if he says it to multiple ladies, just ask Lauren from Ben’s season. Plus technically he isn’t even allowed to say that to anyone until the very end…Bachelor rules. There are no roses on one-on-one dates tonight so we will just have to wait and see if Vanessa makes it to hometown dates, I will bet money on it! 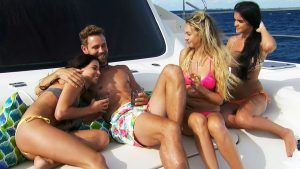 We start this date on yet another yacht with Nick giving A LOT of extra attention to Kristina’s inner thigh while applying sunscreen. If I were Corinne or Raven I would start worrying right about now. Nick lets the ladies know that today’s activity will be swimming with sharks, yeah no thank you! Kristina seems terrified, Corinne seems confused, and Raven doesn’t seem worried at all, in fact she says, “I will punch a shark in the face if it gets close to me and if the other two girls get eaten today, I will definitely be in the running to get the rose.” That’s the spirit Raven! Kristina lasts about 3 minutes in the water before needing to go up on the boat and like a gentleman (?) Nick follows her to make sure she is ok leaving Corinne & Raven to be shark food. On to the night portion of the date…Kristina has the first one on one time where Nick is still crying about the whole Danielle thing (how much longer is he going to harp on this, geez) but I guess Kristina likes all the crying because she is excited to bring him home. Next up Raven who talks about how her dad was diagnosed with lung cancer a few years ago which is why she left law school but he is now in remission. Corinne spends her time talking in the third person about how she “wants to lock Corinne in with Nick,” and how she was feeling upset that everyone but her has had a one on one date. Nick reassures her with some making out and she leaves the alone time feeling confident. Date rose goes to Raven, which was surprising to me because I thought for sure it was going to Kristina. Raven & Nick leave for some more alone time leaving the other girls looking like this:

Nick & Danielle spend this date riding bikes, eating local cuisine, shopping, playing some basketball, & having nothing to talk about. They seem to have absolutely no chemistry but maybe the date will start to pick up. Danielle thinks is it going wonderfully so not sure if is on the same date I am watching. At dinner that night Danielle opens up some about how she

hasn’t taken anyone home since her fiance passed away and that she is scared to tell Nick her feelings since the last time she felt this way the person died. Despite telling Nick that her heart is very open to him he says he doesn’t see a future with her and that he just doesn’t think his heart can get there.  He tells her “you’re just so great” to which she responds with “not great enough.” Ouch. With that he sends her back to the house to get her stuff and tell the ladies goodbye.

Now for the time the previews have shown over and over again….Corinne sneaking over to Nick’s room, in high heel Christian Louboutin shoes of course, because she runs a multi-million dollar company in case you didn’t know. Some of the wonderful one liners from Corinne: “Turn the spark into a fire,” “I am going to blow that room up,” and of course:

Nick- “What do you have in mind”
Corinne- “Let’s dive into bed….You have to have two hands on at all times. Never jiggle. Lightly massage.”

I have to say I am extremely surprised he sent her on her merry way without getting to see the platinum vagine but it did give us this so for that I am thankful.

One-one-One: Rachel….Let’s get a taste of the local flavor

This was probably the shortest date I have ever seen on this show. They go grab some beers at a locals only bar, talked some more about how scared Nick is of her dad, and find out that she has never brought home a white guy

but that isn’t something that matters to her family. They know she is smart and “love sports but doesn’t play games.” These two have such a easy, nice, passionate connection. If I had seen more of this connection first episode she may have been my pick to win over Vanessa. This date seems to last all of 5 minutes but it is clear she is moving onto hometowns.

After this week of dates Nick know who he needs to send home saying “With the woman I’m going to be sending home, I care about her a lot. I want it to be in a personal and as private way as possible.” With that he goes into the house to find Kristina. As soon as she realized she is going home it is almost too painful to watch.

He tells her that he has such love for her but doesn’t feel like he is falling in love and he has a stronger connection with the other ladies. This is definitely the hardest break up thus far and I can only imagine what it feels like to be sent home after what was clearly a good connection especially knowing Corinne is still in the running. I have a feeling we will be seeing Kristina in ‘Bachelor in Paradise’ so not all is lost.

That’s all for this week. Who do you think the mystery girl that returns next week is? Do you think all four of the ladies get a hometown date? Tune in next week to find out.