Home Television ‘The Bachelor’ Episode 6 Recap: Is This the End?

‘The Bachelor’ Episode 6 Recap: Is This the End? 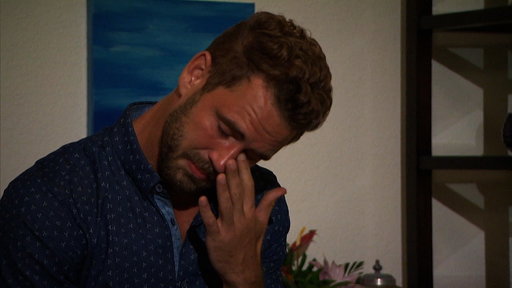 Tis that time folks…seeing where Nick’s love adventure takes him next. We left off with Taylor interrupting Corinne and Nick’s date to tell him that Corinne is a liar. For all the buildup I have to say it was pretty anticlimactic. Nick thanked her for the information, assured her that is wasn’t what Corinne said that made him send Taylor home, but that he is still wanting to see where things go with Corinne aka he hasn’t gotten to sleep with her yet. Taylor doesn’t seem very torn up about it so clearly it was the right choice to send her home.

Nick has decided this week to skip the cocktail party and just go straight to the rose ceremony. Corinne, Danielle M., and Rachel already have roses & Taylor was sent home on the two on one. Kristina, Raven, Vanessa, Danielle L., Jasmine & Whitney get roses tonight which means Jaimi, Josephine, & Alexis go home. No real surprise there.

Nick picks Kristina up in a seaplane to go off and explore the island. These dates are really boring this season. Every single one is exploring what city they are in and then going to dinner. I miss the early Bachelor days with unrealistic dates, can we bring those back? They go to the Annaberg ruins for some beer and Kristina proceeds to tell Nick a little bit about her family; she has 8 adoptive siblings and one biological sister who is still in Russia. You can tell there is so much to Kristina’s story but more on that later.

Meanwhile back at the mansion the ladies have a visitor….the St. Thomas version of Corinne’s nanny Racquel, say hello to Miss Lorna.  Of course Corinne takes full advantage:

Now back to Nick & Kristina’s date where they sit down for dinner and have the most meaningful conversation thus far in the season. Kristina talks about growing up very poor in Russia, not really ever having much food to the point where she remembers eating lipstick. She lived with her mom until she was about 5 or 6 and she tells a story of how one day her mom left the house for a day and told Kristina not to eat anything but she did and when her mom returned and found out she

sent her away. From there she was in an orphanage until she was 12 and got an adoption request from a couple that lived in the US. She talked about how she had such a hard time deciding to leave all the kids in the orphanage that had grown to be family, as well her sister, but a teacher told her “if you stay in Russia your life will be in black and white but if you go to America it will be in color.” Just let that sink in for a minute. Kristina gets the rose and earns the respect of anyone watching. Good for her for deciding to better her life. This date is the only light in this episode. It goes waaaaaay downhill from here.

The girls & Nick take a catamaran to Abi Beach for a fun filled day of drinking, cornhole, volleyball and tears. From the start

of this date there is a sense of dread that only deepens minute by minute. Jasmine is slowly going off the deep end because she hasn’t had a one-on-one, the ladies are getting irritated watching Nick chase after Corinne, they all hate having to play volleyball instead of hanging with Nick, and Nick is doing NOTHING to make anyone feel better. The day date ends with all the girls off in their own corner crying. This is probably the worse group date in this history of this show. If you think it gets any better in the night portion of the date you are so wrong. First up is Rachel who says that group dates aren’t her thing (are they anyone’s thing?) and that she was very close to wanting to leave after that disastrous beach date but decided to stick it out because of her feelings for Nick. Vanessa tells him this is the hardest week yet & Corinne says it’s getting really hard. Meanwhile Jasmine is slowly unraveling in front of the ladies because she feels like she is being overlooked blah blah and oh wait it is time for her one-on-one time….dun dun duuuuuuuuun. Jasmine decides to use her alone time with

Nick to rip into him for not giving her enough attention & validation and then says that it makes her so upset that she wants to choke him. When he looks scared she then tells him she meant it in a sexual way, like straddle him and give him a chokey. What are you doing?!?!?!?! Not surprising she gets sent home and all I can say is good luck watching this back girl. Group date rose goes to Raven.

This pairing doesn’t really make much sense to me, from what I can tell he has a great connection with Danielle and has barely spent any time with Whitney. They take a helicopter ride to a deserted beach (of course it has to be a place where

they can leave the “loser” stranded alone, so predictable Bachelor producers) to have some one-on-one time before someone gets the boot. Does that beach hut remind anyone else of Bachelor in Paradise? He seems to spend about 5 minutes with each of them before deciding to give Whitney the boot. Danielle & Nick ride off in the helicopter and, shocker, Whitney gets left all alone on a beach. Haven’t we done this already ahem Olivia. Now it is time for Nick & Danielle to have some alone time. At this point I already know Danielle is going home, you can just feel it but poor girl definitely does not pick up on that. She just keeps talking and talking and talking about how much she likes him, about their great connection, about how she is falling in love with him. Nick put her out of her misery already, this is just painful. How can she not look at him and know she is going home?? Saying goodbye to Danielle seems to be Nick’s breaking point and is starting to make him think maybe he won’t find what he is looking for. If he can’t make it work with someone he had such a great connection with from the start how is this suppose to work for him. He thinks maybe he is the problem. GASP! It took 4 seasons to make you finally realize this?

From here Nick decides to go to the ladies’ hotel room where he proceeds to tell them, between tears, “I really want this to work out, but I want it to be real and I want it to be right. And, you know, right now I just feel, like, terrified that it’s not gonna happen.” He says he may not be able to do this anymore, shocking the ladies, and ending the episode.

Do you think next week he will come back and try to make it work? Will he and Corinne finally do the dirty? If so can Corinne and her “platinum vageen” finally go home? Tune in next week to find out.

They measure the slots and ranking them around the basis of
the caliber of the activities, the customer help solutions within the casinos, and
participant rewards.