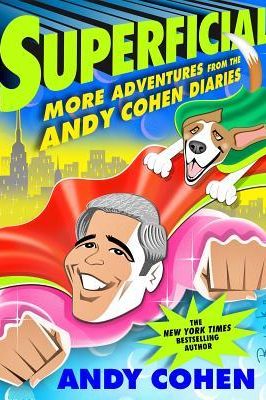 Synopsis:
The megapopular host of Watch What Happens: Live and executive producer of The Real Housewives franchise is back, better than ever, and telling stories that will keep his publicist up at night.

Since the publication of his last book, Andy has toured the country with his sidekick Anderson Cooper, hit the radio waves with his own Sirius station, Radio Andy, appeared on Real Time with Bill Maher despite his mother’s conviction he was not intellectually prepared, hosted NBC’s Primetime New Year’s Eve special, guest edited Entertainment Weekly, starred in Bravo’s Then & Now with Andy Cohen, offended celebrities with his ongoing case of foot-in-mouth disease, and welcomed home Teresa “Namaste” Giudice, from a brief stint in jail. Hopping from the Hamptons to the Manhattan dating world, the dog park to the red carpet, Cardinals superfan and mama’s boy Andy Cohen, with Wacha in tow, is the kind of star that fans are dying to be friends with. This book gives them that chance.

If The Andy Cohen Diaries was deemed “the literary equivalent of a Fresca and tequila” by Jimmy Fallon, Superficialis a double: dishier, juicier, and friskier. In this account of his escapades—personal, professional, and behind-the-scenes—Andy tells us not only what goes down, but exactly what he thinks of it.

Review:
I LOVE everything Bravo & Andy Cohen…..they are my ultimate guilty pleasure. I am actually watching Watch What Happens: Live as I write this. I have read all three of Andy’s books and they are exactly what you would expect them to be, full of celebrity stories and all about his fabulous life. I love how he doesn’t take himself too seriously and will be the first one to tell you when he is being a bit shallow. I may like this book because I kind of want Andy Cohen’s life. He gets to live in NY, rub elbows with celebrities, travel all the time, and lives a fab life. I mean one of his bffs is Carrie Bradshaw! If you want an entertaining read go for it, if you are easily offended or don’t like shows like the Housewives maybe skip it.

I blog quite often and I seriously thank you for
your content. This great article has really peaked my interest.

I’m going to book mark your site and keep checking for new details about once a week.
I subscribed to your Feed as well.

You are in a risk of getting your bank account amount being maintained inside
the online poker game supplier’s host.

I love what you guys are usually up too. This type of clever work and coverage!

Keep up the great works guys I’ve incorporated you guys to blogroll.

Great article, exactly what I wanted to find.